Makati Shangri-La, Manila will be having the One Grand Buffet celebration in Circles Event Cafe (Yes. That award-winning buffet-style restaurant that Makati-Shangri-La is known for). If you saw in the Facebook post, ticket entries for the Circles Event Cafe were being sold until December 30, 2013, to avail of the special promotional price of PHP 1,000.00 per head. These tickets can be used from January 2, 2014 until March 3, 2014.

And so if you didn’t see it, there is another way to get a couple of tickets. 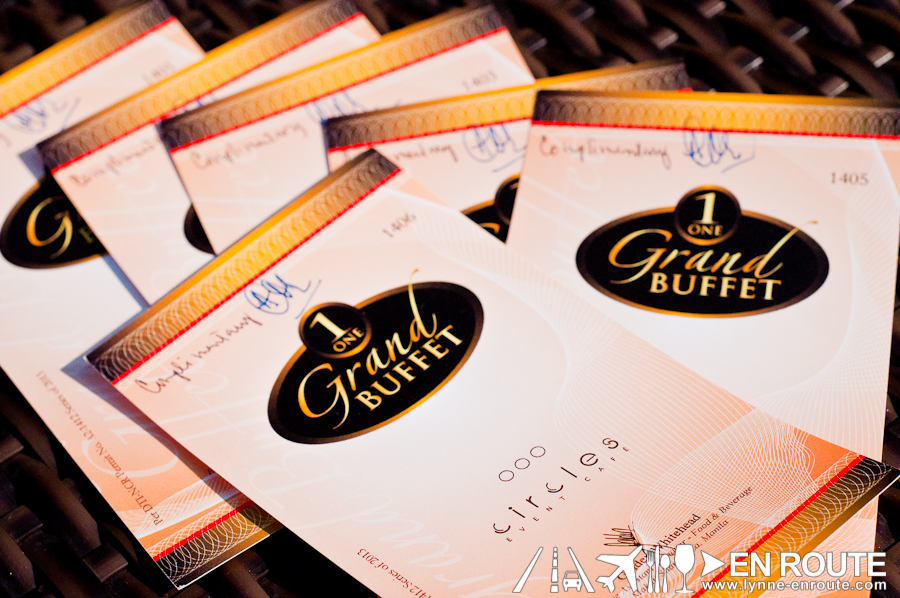 In the kindness of their hearts, Makati Shangri-La has provided Lynne-Enroute.com with six (6) tickets! As such, since we rarely hold giveaways, it was best to reward the loyal readers of the blog by coming up with a giveaway for those who patiently bear with our obscure way of writing when the opportunity arises.

We will be giving away two (2) tickets per week for three weeks through their own separate raffle giveaway posts:

How to enter the Raffle Giveaway:

Simply follow the steps in the Rafflecopter Widget below, answer the questions (Don’t worry, we made it relatively easy), and wait for the draw. Draw Dates are the following:

This Rafflecopter Giveaway will be for the first two (2) tickets to Makati Shangri-la Manila’s One Grand Buffet (Week 1) . Please also read Terms and Conditions below.

This promotion is in no way sponsored, endorsed or administered by, or associated with, Facebook. We hereby release Facebook of any liability. This promotion is in no way sponsored, endorsed or administered by, Makati-Shangri-La, and that the vouchers are complimentary vouchers given to Lynne-Enroute.com for its use. We hereby release Makati Shangri-La of any liability. Only residents of the Republic of the Philippines with a valid mailing address are eligible for this entry. Winner(s) will be declared at the En Route Facebook Page within 48 hours after the giveaway ends. The winner is asked to send a private message pertaining where the vouchers can be mailed. In the event that the winner does not respond within 48 hours with a valid mailing address, the prize will be forfeited and a new winner will be drawn. Previous winners of any Makati Shangri-La One Grand Buffet giveaway by Lynne-Enroute.com are not allowed to join. Any winners that have listed in such previous giveaway will be disqualified. Lynne-Enroute.com reserves the right to disqualify, forfeit, or revoke any winners discovered to have not followed the mechanics or the Terms and Conditions, or have committed fraudulent, coercive, illegal, and unethical acts to obtain the prizes for this giveaway.