It is great to be a Filipino these days. Something magical has happened ever since a new president has taken the helm (still highly debatable, but you can’t deny statistics).

It feels like a long time coming, too. Filipinos are a proud race and are not afraid to show it, but it doesn’t seem as recognized as there just seems to be a perennial glass ceiling that cannot be broken because there is still a bit of shame of knowing that the homeland is still struggling.

But now, it’s all different. Pride now manifests itself everywhere, and it is more evident in showing our cuisine. Case in point: just the few times that Anthony Bourdain has interacted with Filipino food has seen a surge in Facebook likes and shares that leave a dent in cyberspace bandwidth.

When you ask about Filipino cuisine, however, the dishes that describe a Filipino is as divided and diverse as the 7,107 islands that make the country. It’s hard to bring it all together for even the appreciation of the Filipino dining public. One hotel restaurant, however, aims at turning this into a reality. F1 Hotel Manila has taken the famed Chef Sau Del Rosario and placed him at the executive chef helm with the objective of creating a feast that can be called truly Filipino. And how else than to aptly name this: 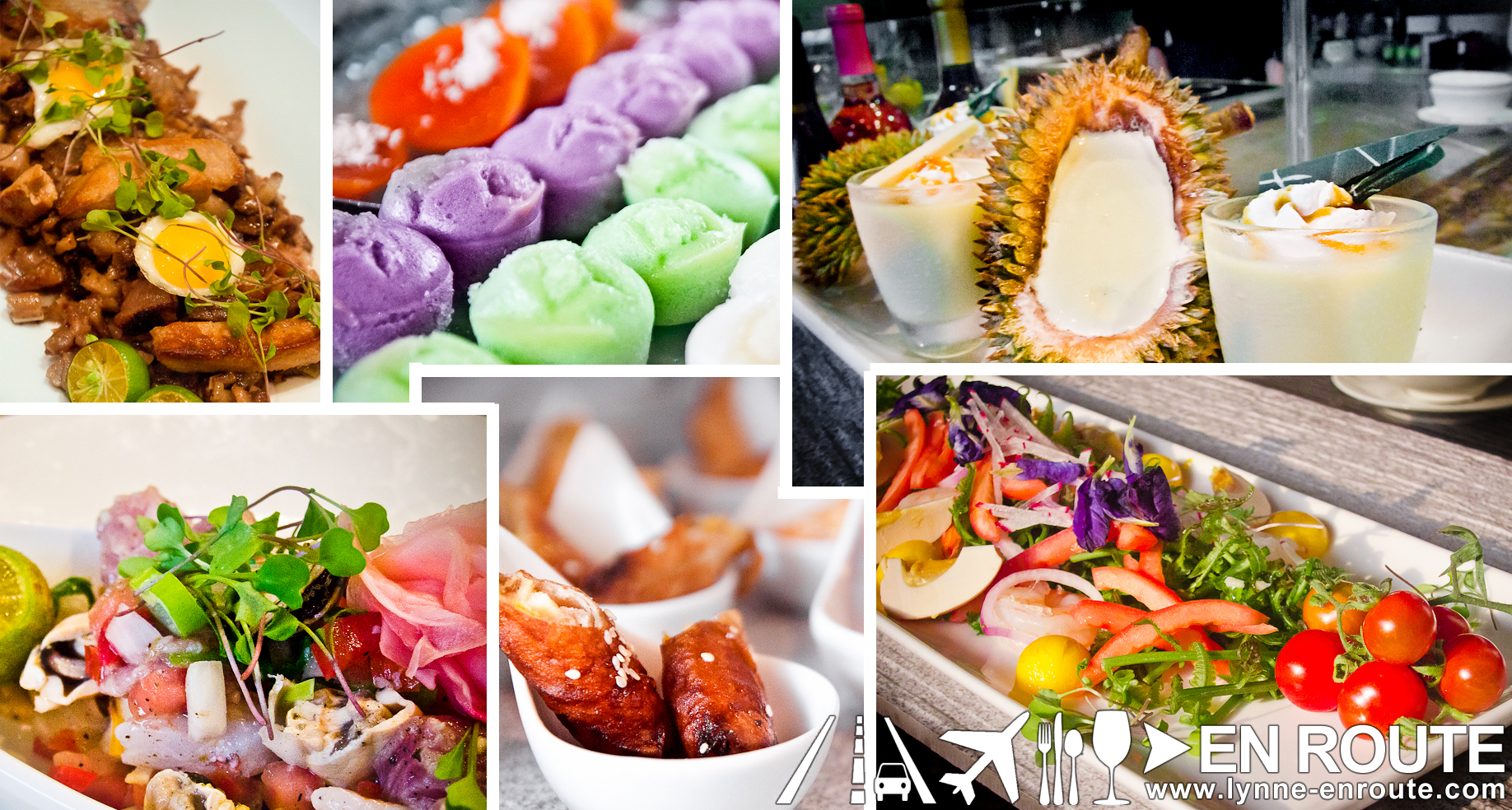 LUZVIMINDA, being the acronym of the three major island groups of the Philippines (Luzon, Visayas, Mindanao), becomes the platform for some of the country’s known chefs in the region to showcase a cuisine that is regionally distinct, but rightly still called truly Filipino.

Joining Chef Sau  in this endeavour are Chef Martin Jickain of White House Boracay creating dishes from Luzon, the chef duo Karl John Noel and Paul Sidney Uy of Casa Verde in Cebu representing Visayas, and the renowned Executive Chef of Marco Polo Davao Ed Tuason and his ensemble bringing the influences of the Mindanao islands (and why it may be more fun there).

It is a star studded cast that will give a taste of the Philippines in one grand buffet. 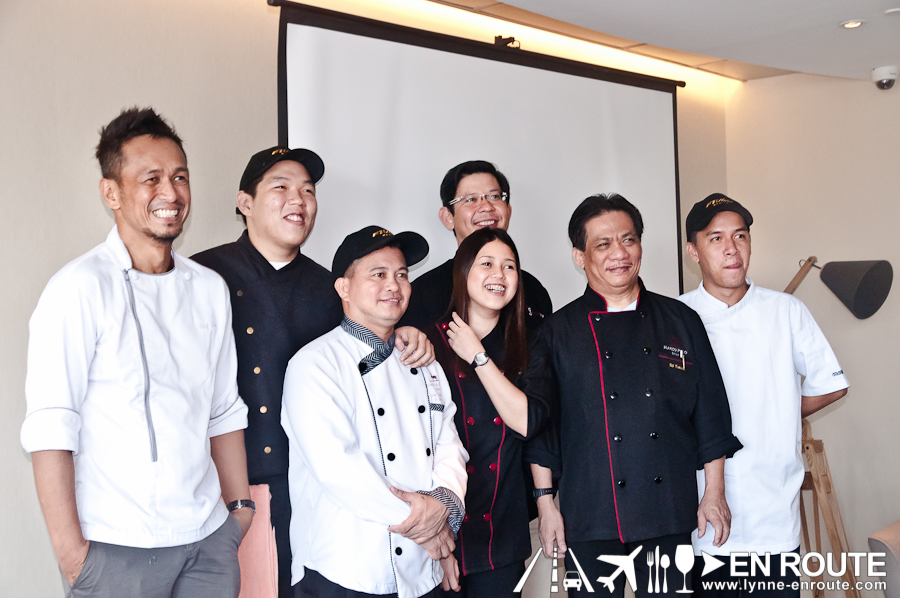 This is a showcase that will be available from June 1 to June 30 of 2013, perfectly timed for the month of independence. The June 12 holiday might be a good time to have an overnight Philippine staycation and feast on the Filipino dishes as well.

If there is one great and patriotic thing to note about the LUZVIMINDA Feast is that the chefs have closely worked with local farmers that grow produce only through organic methods. This push is to raise awareness about the importance and value for the produce, the respect for the purity of the dish in using organic growing methods, and a support to the local farming industry while alleviating the dining experience. This seems to be the push of most of the chefs that have great media influence like what Chef Bruce Lim has done for Corniche.

The chefs have provided a demonstration of their skills to a select audience and students from various culinary schools, giving insight into how some dishes are prepared in the Philippine islands: 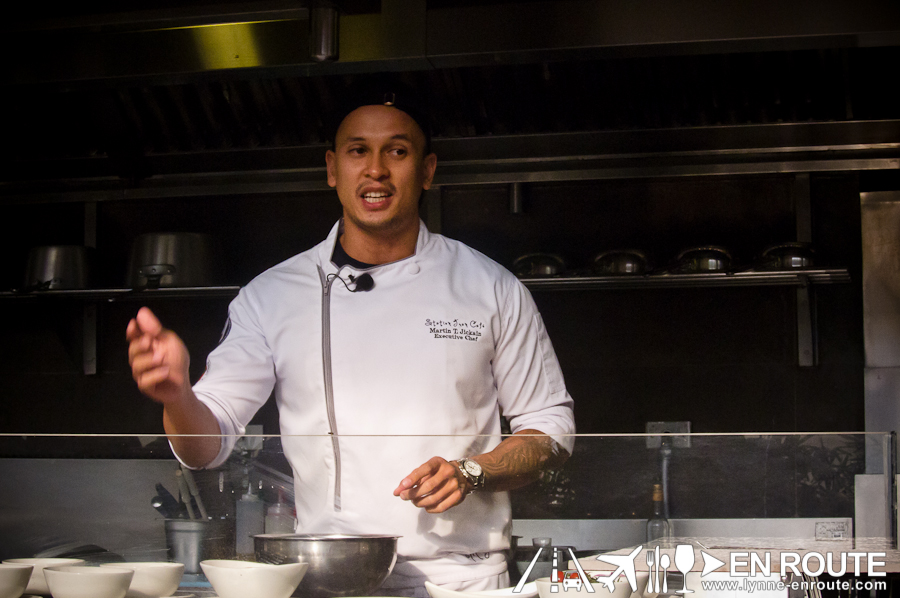 With Luzon being a large island with a lot of landlocked provinces, most of the dishes are those that utilize meat and greenery inherent to the region. Chef Martin Jickain made a refreshing Salad From Pako Leaves, Shrimps, Cherry Tomatoes And Salted Egg. 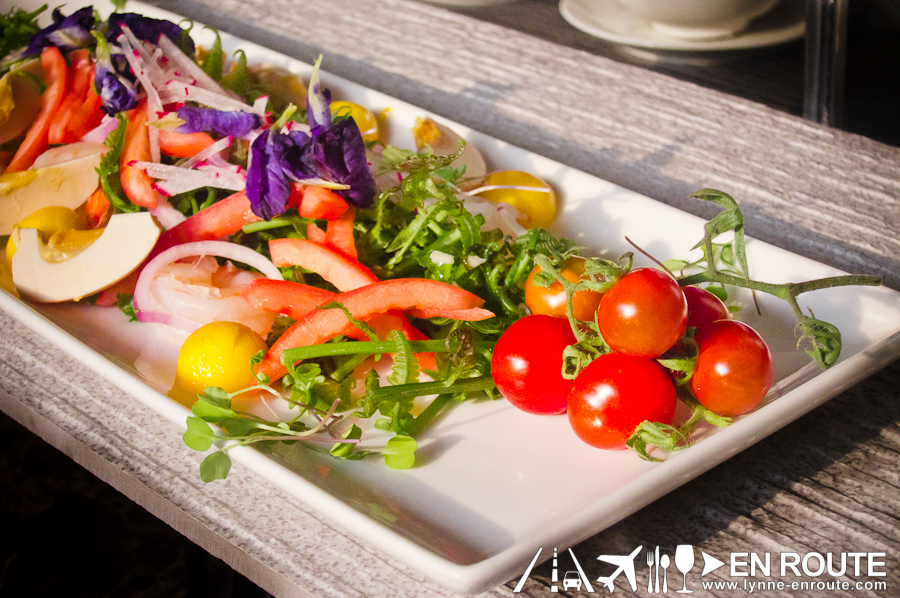 Karl John Noel and Paul Sidney Uy for the Visayas: 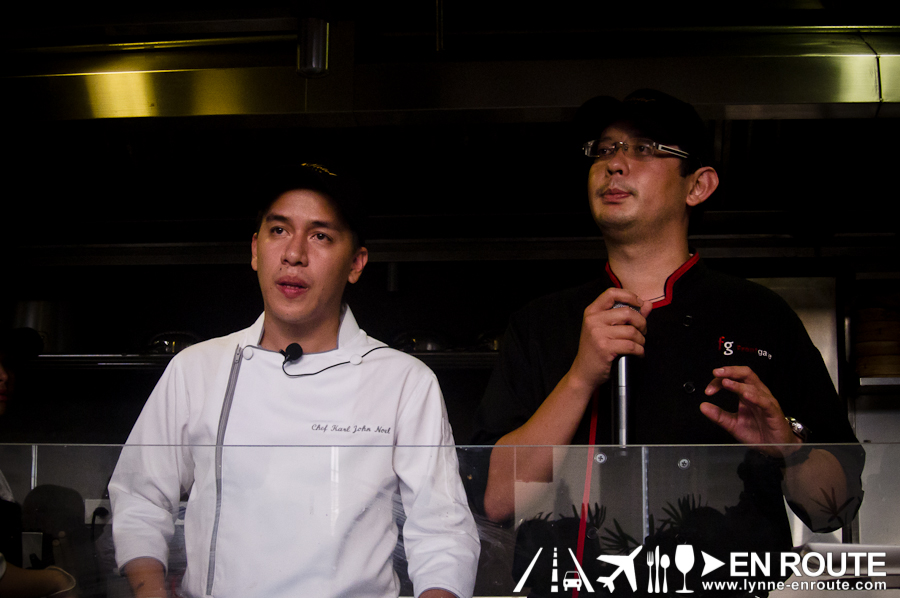 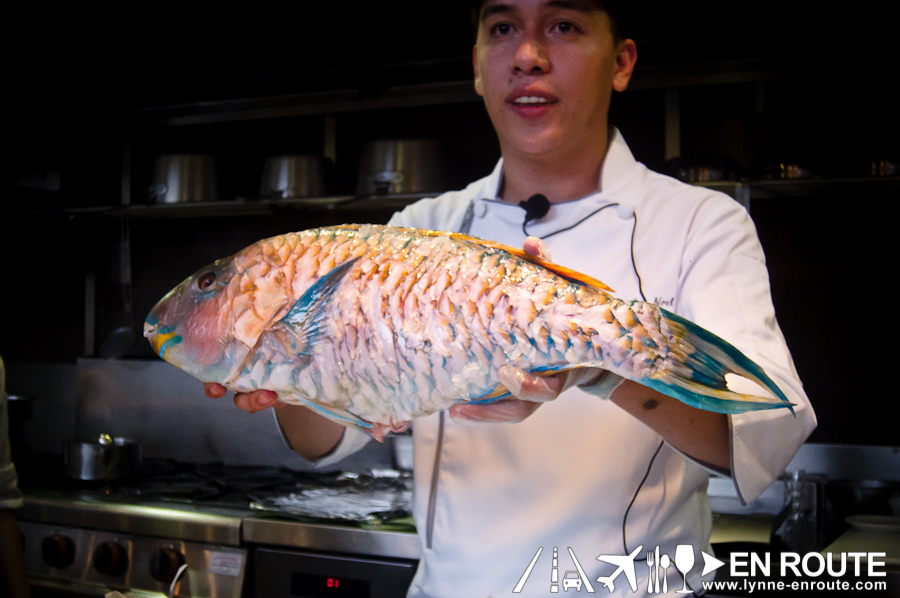 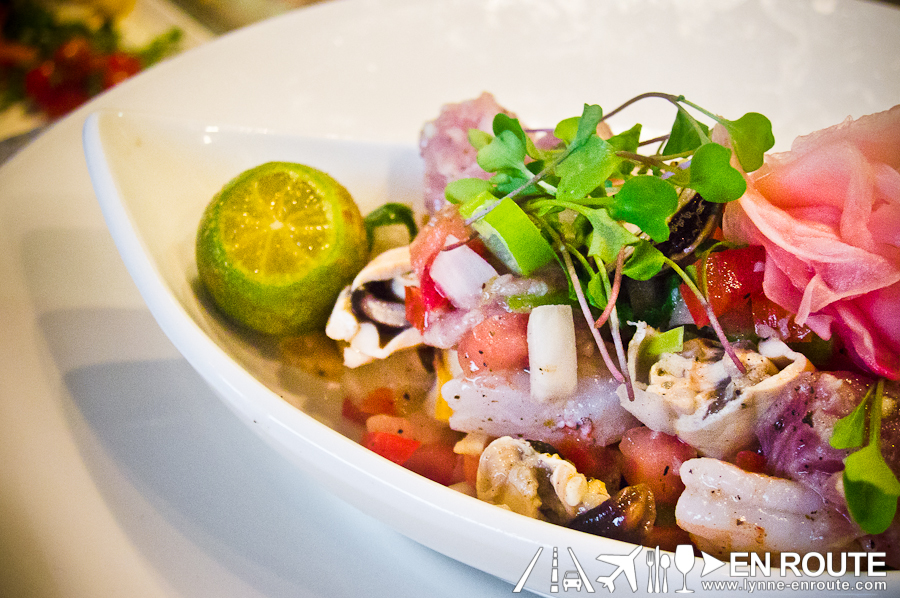 This comedic duo provided along with their skills a good sideshow of witty humor as they gave the insight that the Visayan region uses the freshest seafood as the main component of the cooking methods. The partners stressed how Visayan Kilawin is to be served as fresh as possible and that the vinegar should never overpower or cook the fish, and a Steamed Parrot Fish With A Special Soy Sauce Marinade also requires that proper ratio and proportion is needed to balance flavors.

The group of Chef Ed Tuason for Mindanao: 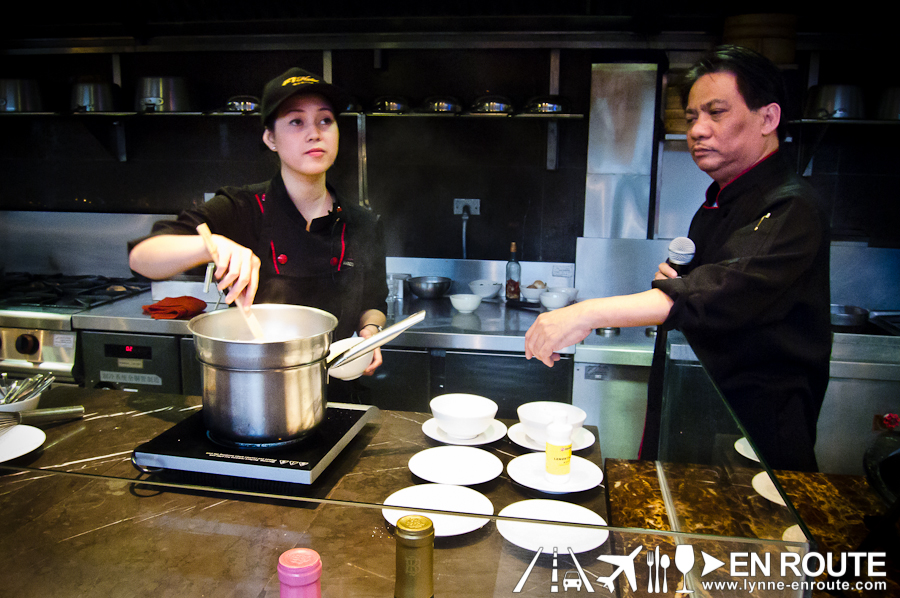 The famous executive chef of Marco Polo Hotel showcased how Mindanao cuisine draws a lot of influence from the Malay and Indonesian region of the world, with distinct flavors that are the last frontier for Filipino cuisine. The best fusion dish of the show? Durian Panna Cotta.

While durian is still an acquired taste to most people, those who swear by its flavor will get a creamy kick and smooth finish, the stuff that dessert dreams are made of. 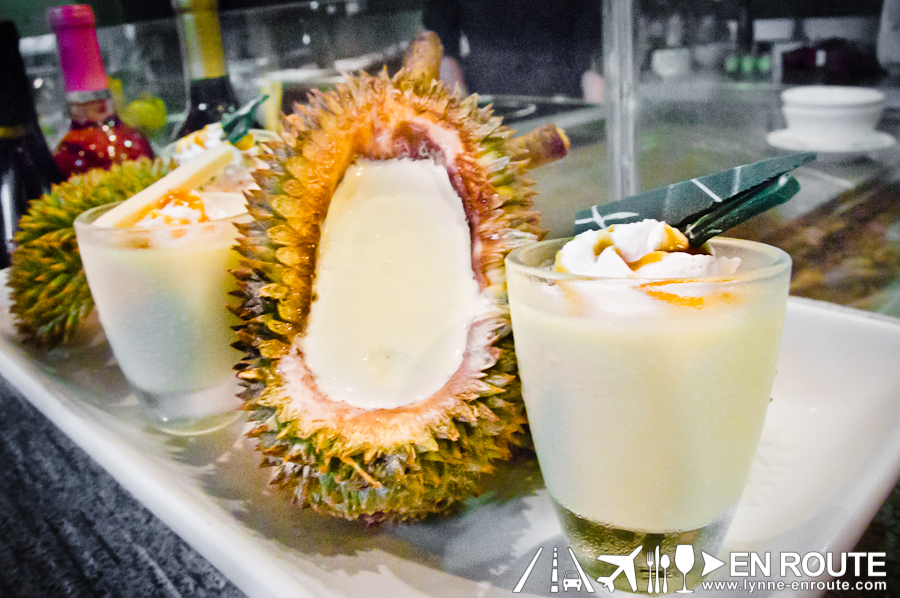 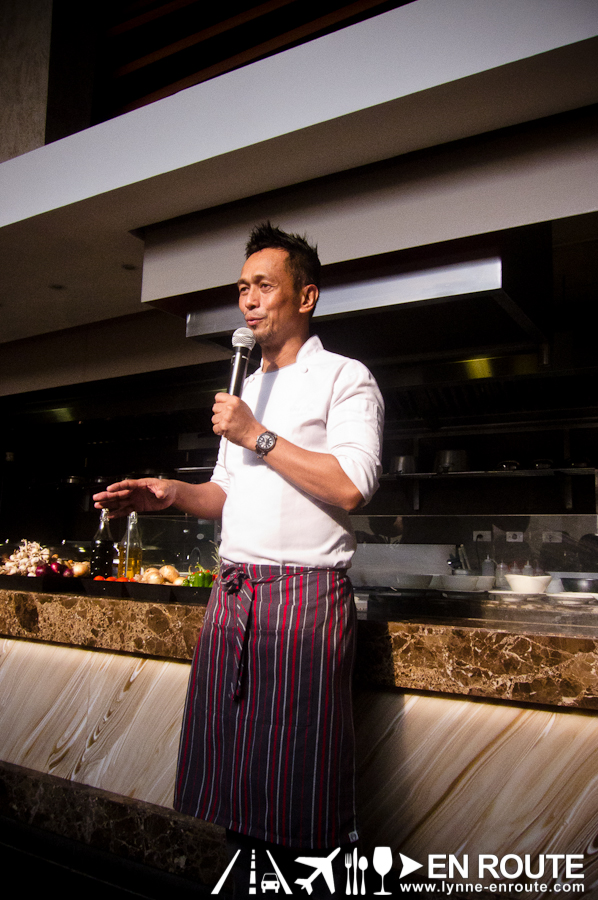 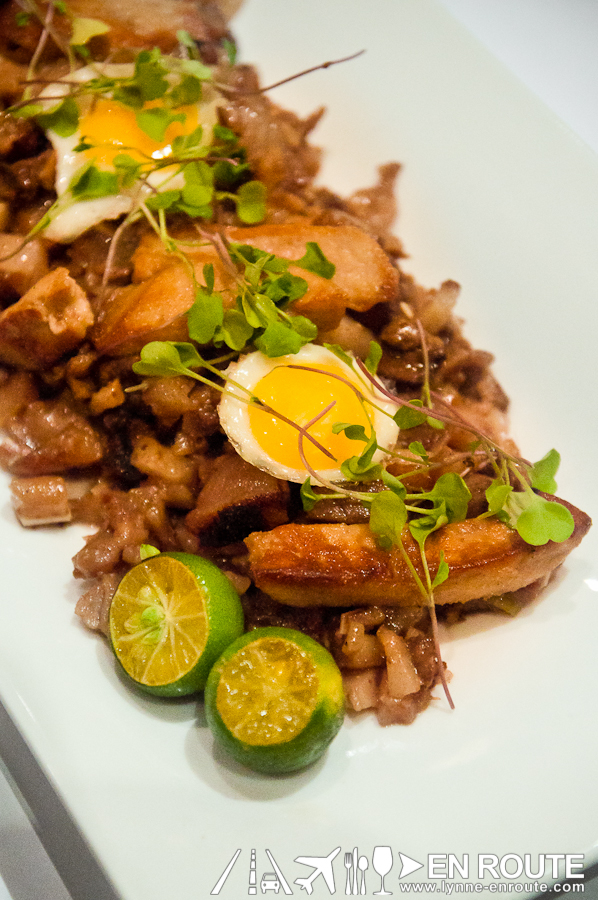 One trademark showcase of Chef Sau Del Rosario that cannot be missed would definitely be the artery breaking Foie Gras Sisig Topped With Quail Eggs. Widely recognized as originating from Pampanga, this sisig is given a calorie steroid boost with chunks of foie gras and delicately cooked quail eggs. The thought of this topped in smoldering hot garlic rice with the foie gras melting from the steam can send giggly chills to the voracious eater.

The show was just a preview of what else the LUZVIMINDA Buffet Feast has in store. All of this can be found in the “F” All Day Dining restaurant. 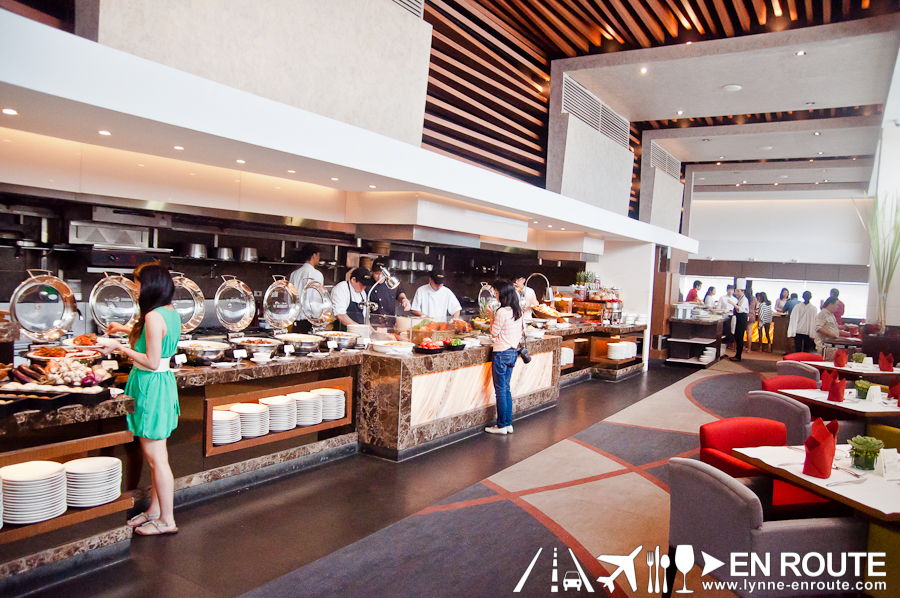 The smorgasbord is spread all throughout the dining area, with the Luzon, Visayas, and Mindanao mingling without any divisions among them. Some as traditional as pork adobo and pocherong baka, with others an adaptation of various regions like tuna sisig and bagoong rice, and then there are bold executions like kalderetang kambing sa langka and that mentioned durian panna cotta. There are even some cheeses from the Malago’s Farmhouse of Davao. The selection of the cheese coupled with the buffet is a sight to behold. 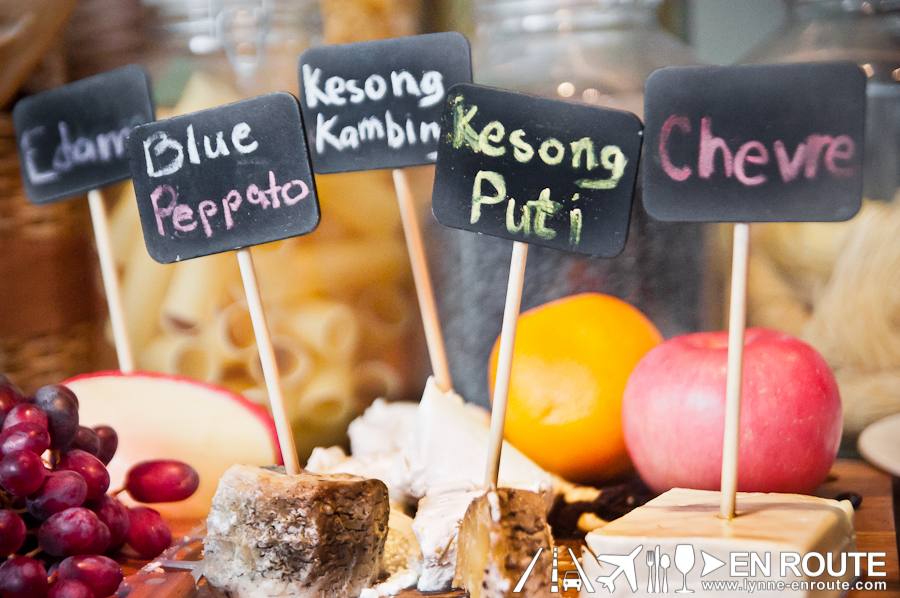 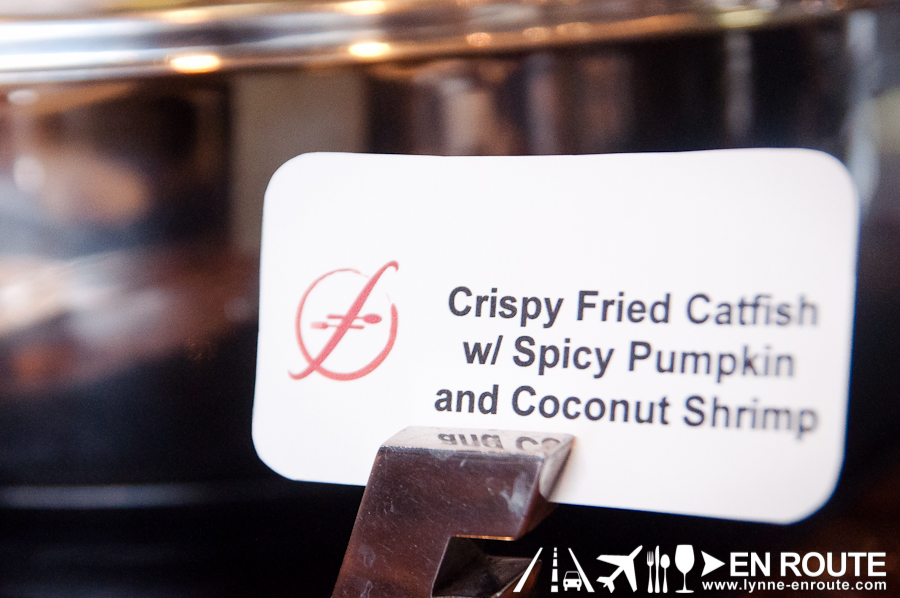 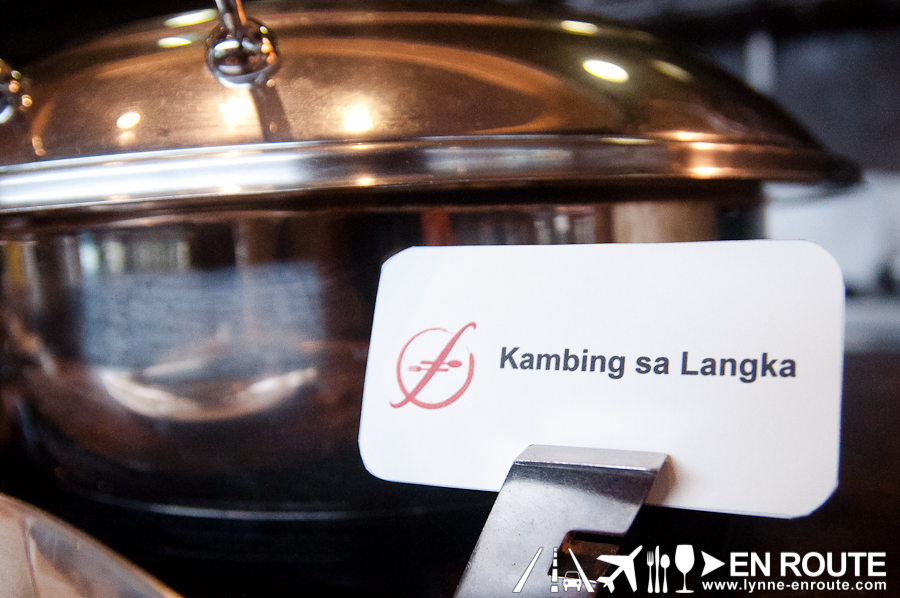 The kalderetang kambing sa langka deserves a special mention, with the meat having a very clean taste and even made more palatable with a slight sweetness from jackfruit. Strangely it doesn’t overpower the essential taste of the dish. The pork adobo is prepared in a semi-toasted approach. Another winner of a dish was the Fried Catfish with Spicy Pumpkin and Coconut Shrimp.

But what stole the show was the rendition of the roasted suckling pig, also known as the lechon. With crispy skin and tasty fillings that permeate through the whole meat, this was cleaned right off, not even the cheeks spared from the onslaught.

As a disclaimer, this buffet was open to the public and not to select guests, so whatever was served then will definitely be served from June 1 to June 30, 2013. 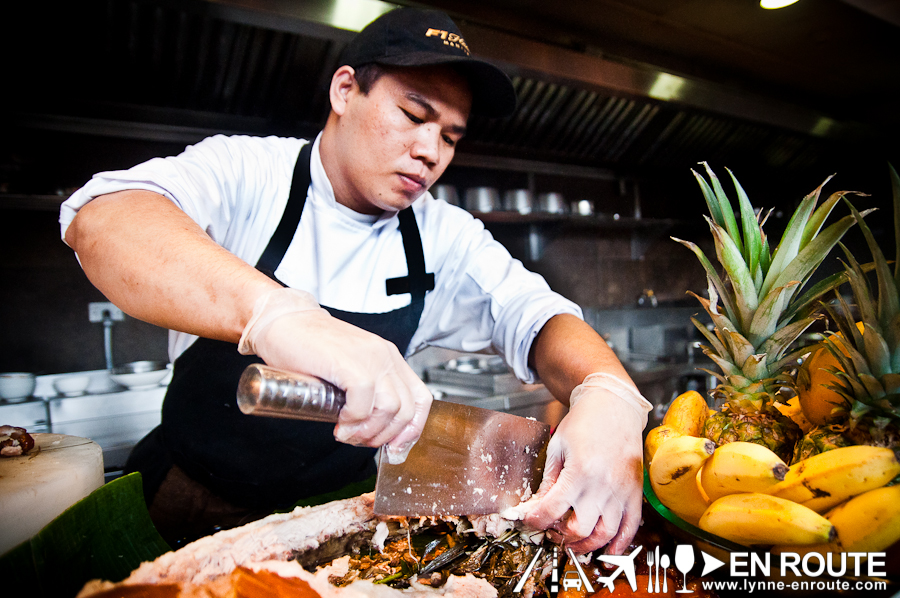 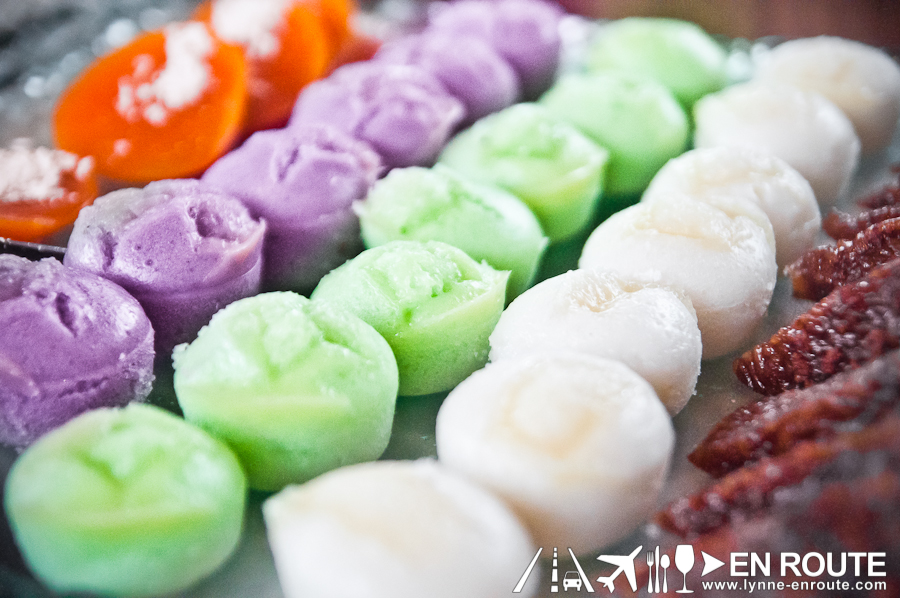 With a cuisine so diverse that it may even take your whole lifetime to scour the vast islands of the Philippines tasting each one of them, the LUZVIMINDA Feast gives everyone the opportunity to savor the island’s flavors in one grand buffet at the F1 Hotel in Manila.

To an extent, you can call this event an effort to give one encompassing call to what Filipino pride is, through a common message that unites the islands: The appreciation of good food shared with good people over great memories. 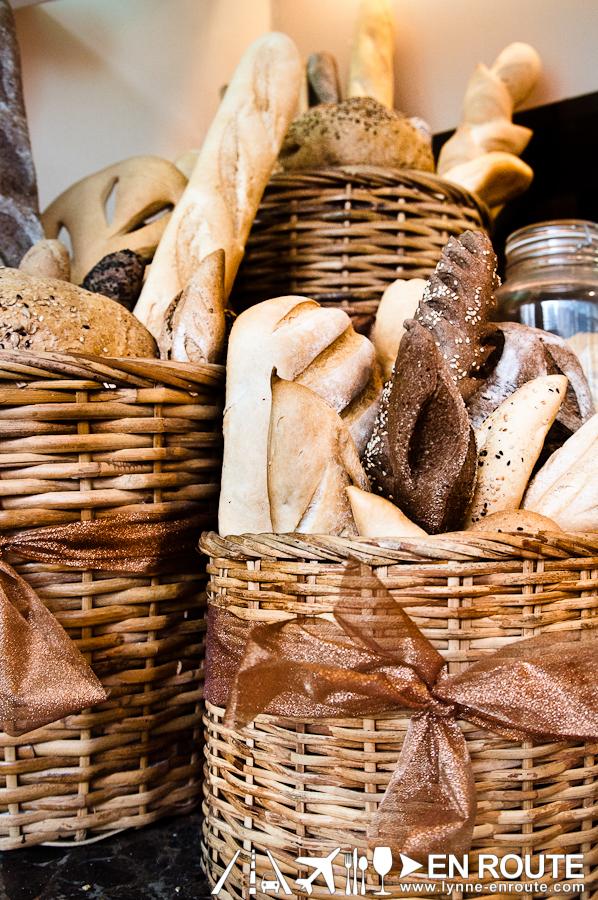 Filipino Chefs and their Work

LUZVIMINDA Feast will be held from June 1 to June 30 2013 at the F1 Manila Hotel in Fort Bonifacio Global City,