It’s rare that a fast food product makes it here in En Route. Most of the time, it has to be something of great novelty (like a burger patty in between two pieces of hashbrown), or because friends have been talking about it that it merited a visit to the local fast food joint

This is more of the latter, because Jollibee has upped the ante to what can now be purchased in this juggernaut of a fast food chain in the Philippines. The serotonin overdosed and oversized mascot specimen of the insect kingdom reigns supreme in the Philippine quick food service industry.

And they further solidify it with this Cheesy Bacon Mushroom Champ. 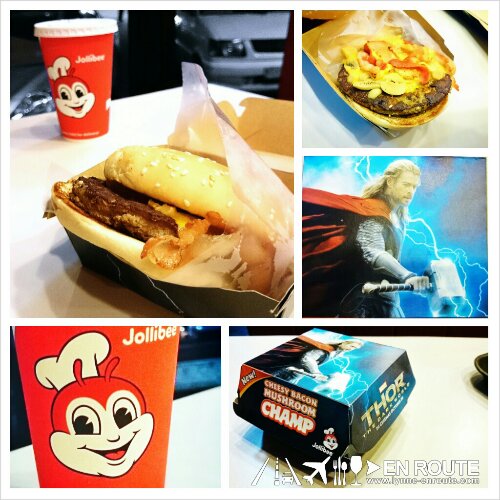 This is basically the size of The Champ, removed of insignificant things like vegetables and replaced with cheese, mushroom, and copious amounts of bacon. For a fast food joint, the bacon spread is very generous.

How timely, too, that this was launched alongside the global release of Marvel Studios’ “Thor: The Dark World”. This manly burger was a fitting association to the fictional Asgardian beefcake plastered all over the packaging, forcing females on no-carb diets to suddenly clamor for extra rice at the mere sight of the box (whether the box had the burger, they probably didn’t care).

To prove its effective association, this was how the conversation over the counter went.

And they punched in the order happily without even asking any questions.

Yes. It is known as THE Thor Burger. Unbelievable.

The taste? The distinct Jollibee burger patty still comes out even if it is buried in loads of cheese and bacon. Whether that is a good or bad thing is up to you to decide. It’s no Foie Gras Burger, but for less than PHP 200.00 complete with fries and drink, it’s way cheaper than one, too.

Too bad Jollibee ran out of those USB flash drives shaped like Thor’s pet hammer Mjolnir. You can get one at an extra PHP 95.00 along with the meal.

Here’s hoping this stays on the menu. No one can get enough of cheesy bacon goodness. Enough of Thor? We leave that up to the readers.