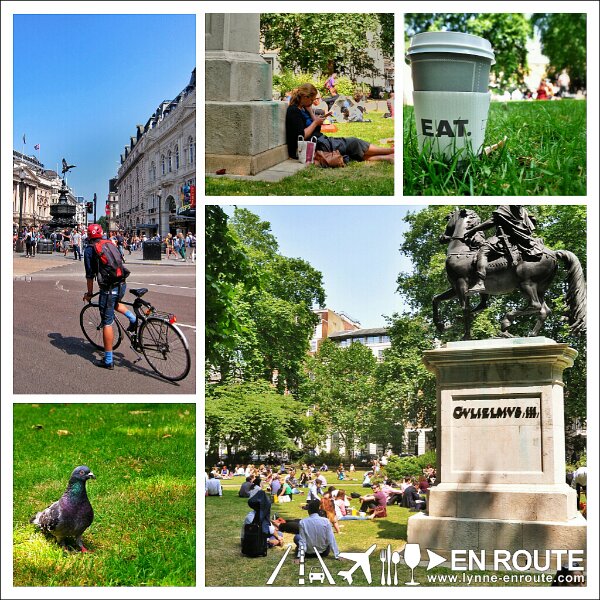 Lynne:
London is one of those big, impressive cities that I have in my imagination. I have to admit though, that my initial knowledge of it does not go very far (or very deep) beyond Buckingham Palace, monarchy, the Spice Girls, Big Ben, MI6, James Bond, and pints of Guinness. (Not to mention different accents that I’ve encountered from people I work with.)

We get here and it’s good London weather. It was sunny skies and people were welcoming summer with open arms, shorts, and flouncy dresses. What is cold and warm is still relative, I realize. As the British bask in the sun, baring skin, I had my jacket pulled tight. But it was bearable cold, very welcome after Manila heat.

I’m still getting used to converting to pounds. I feel everything’s expensive, especially transportation. I am willing to pay for more efficient travel though so in the end, I didn’t mind. And there are lots of ways to enjoy London without breaking the bank. One is walking of course. It let’s you see more of the city. Buy your water from the groceries like Tesco or Sainsbury’s. 50 pence for 2 liters is not so bad. And do enjoy the parks. London has lots of them and even busy office-goers in the Piccadilly area spend lunch break with a sandwich and coffee in hand, sitting on the grass. I find that really awesome. I can’t imagine doing that in the Ayala Triangle. I’ll probably fry.

So, I’m definitely looking forward to more of London.

Ray:
A quick layover in Dubai, a few in flight movies, and now here in London. It’s been more than a decade since that sunny spring visit. Now it’s a sunny summer.

And summer it really is. Everyone is dressed in shorts and light clothing. Some, at the outskirts of the city are topless. Just the guys, though.

Everyone basking in the sun for their lunch break, just chilling out at the many parks that abound in London. This more lazy day was something very different from spring time. It is a welcome difference with pigeons flocking around and ducks wading in the creeks.

The tube (metro) seems more complicated than the ones in Hong Kong and Singapore, or even the ones in Paris or Barcelona. First trip in the circle line got us going the wrong way! Better need to understand the landmark based portion of some of the lines.

Hint: If you will be traveling more than 2 times in a day in the tube, the Off-Peak Travel Card will be the best bargain. Yeah. There’s a Peak price and Off Peak. Off peak is the best time for travelers/visitors of London, which also means it is best to travel during Off Peak hours (The Tube can be hell during rush hour. Locals despise getting late due to clueless tourists who don’t walk as fast).

Now, where’s that pint of Guinness? It’s been too long.