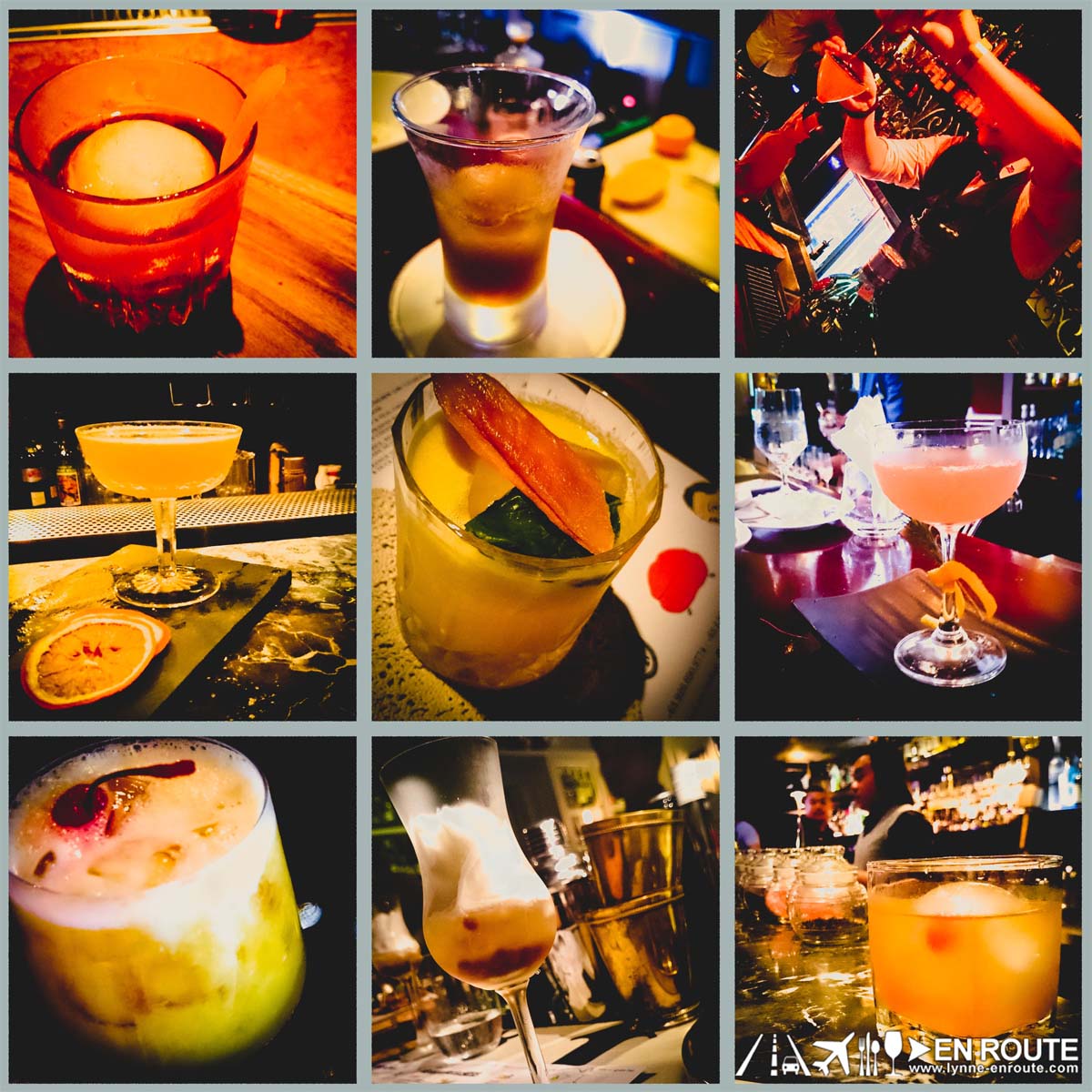 The dust has settled, and there remain four.

The four bartenders from Manila who have made it past all the challenges of the Diageo World Class Bartender Philippines for 2015. It was no easy feat, as each and every challenge required to dig deep from within their knowledge of the craft, understanding of the base flavors, and sheer inspiration and determination to elevate their skills to make the cut.

And now, it was time to send them off to Bangkok where they are to compete for who among them is really the best in the Philippines, with the best heading to Cape Town in South Africa.

And the only proper way to send them off? An epic bar crawl in style.

For this bar crawl, each of the bartenders created a pair of “send-off” drinks, showcasing how the rigorous challenges since February have honed their skills to be worthy to represent the country:

Cocktails: Maynila Sour and The Man 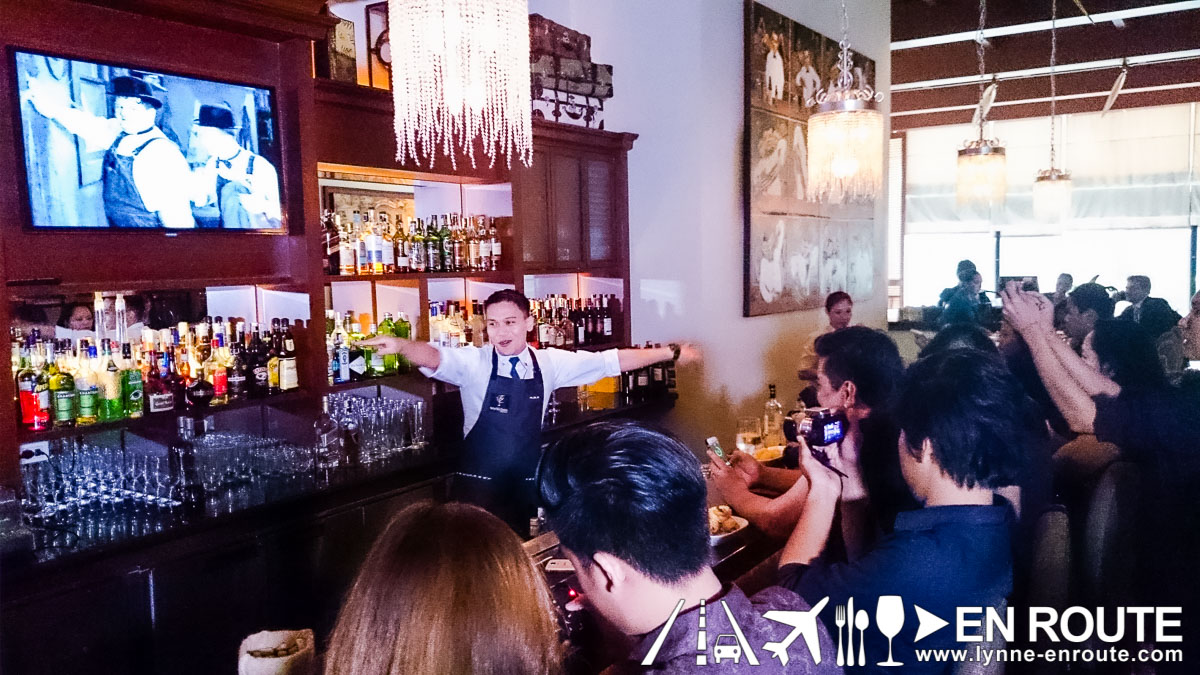 You will have to give it to this guy. It’s just his first year in bartending, and all he was expecting was to learn, and not even make it this far. Yet, with an optimism that was very distinct from the rest of his peers and the thirst to just take in everything as a learning experience, he has proven his place in the final four. 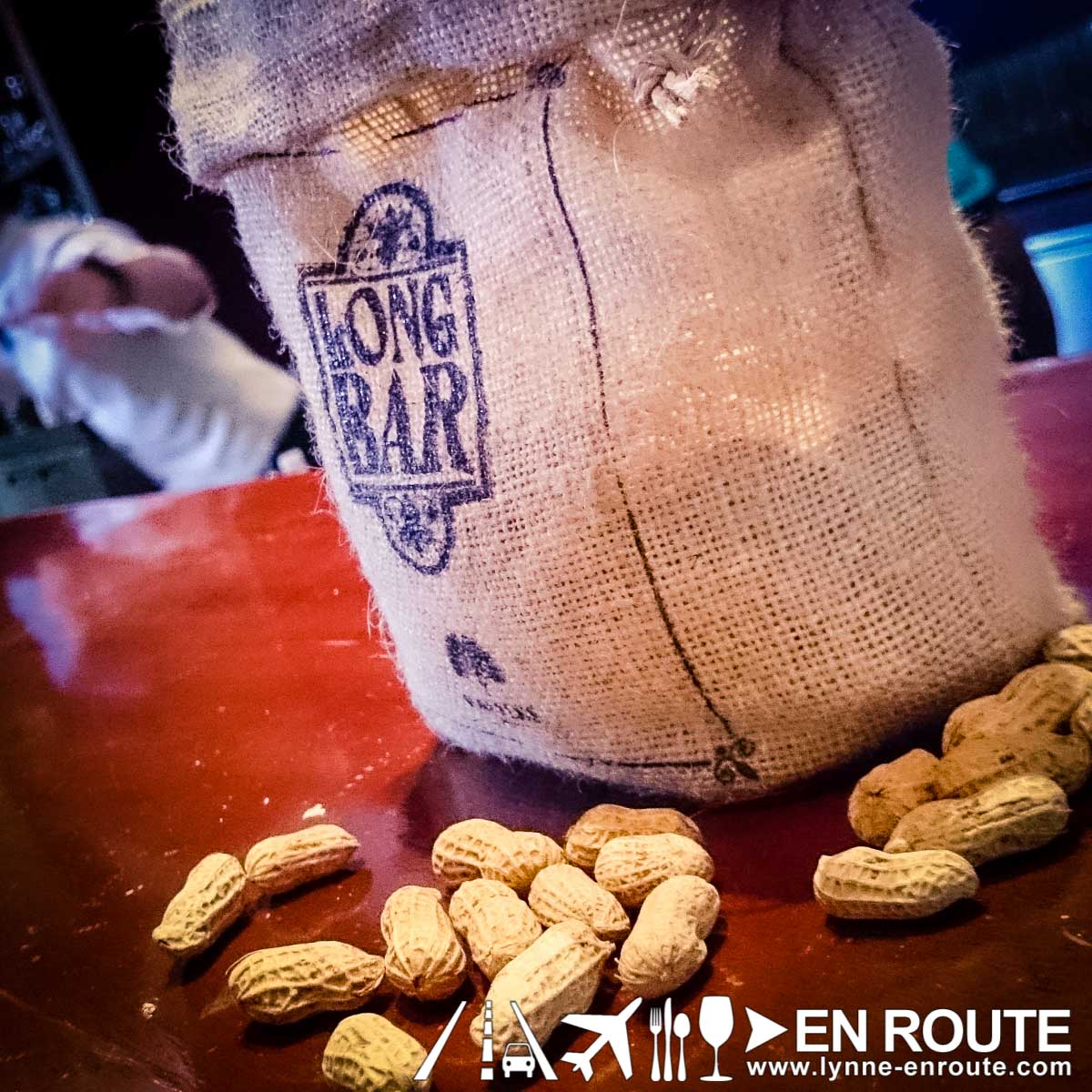 While munching on the known Long Bar peanuts, some creamy croquettes and crunchy chicharon, Orman whips up the Maynila Sour, an inspiration derived from the traditional Bulleit Bourbon Whisky Sour localized with the flavors of both fresh and dried mango. 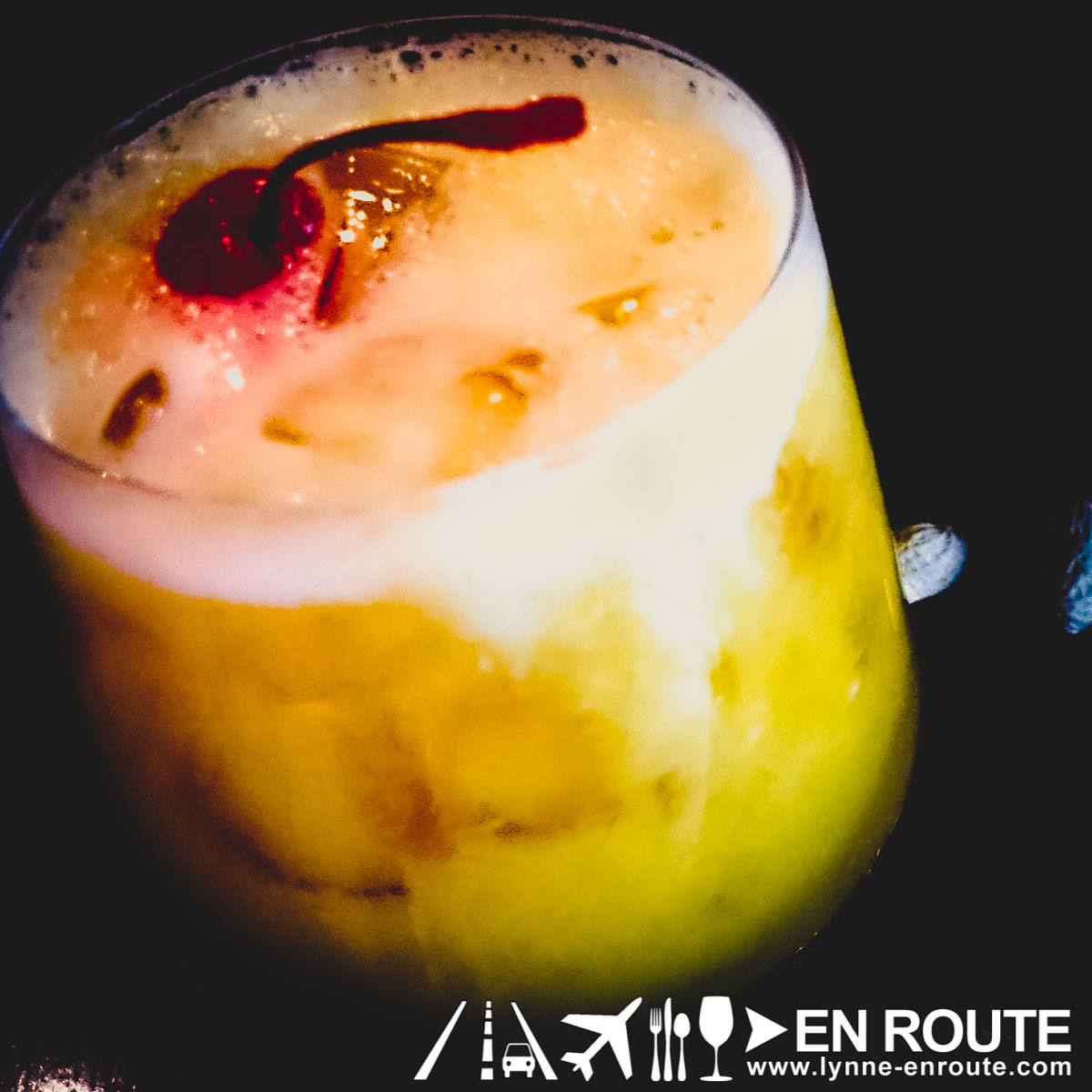 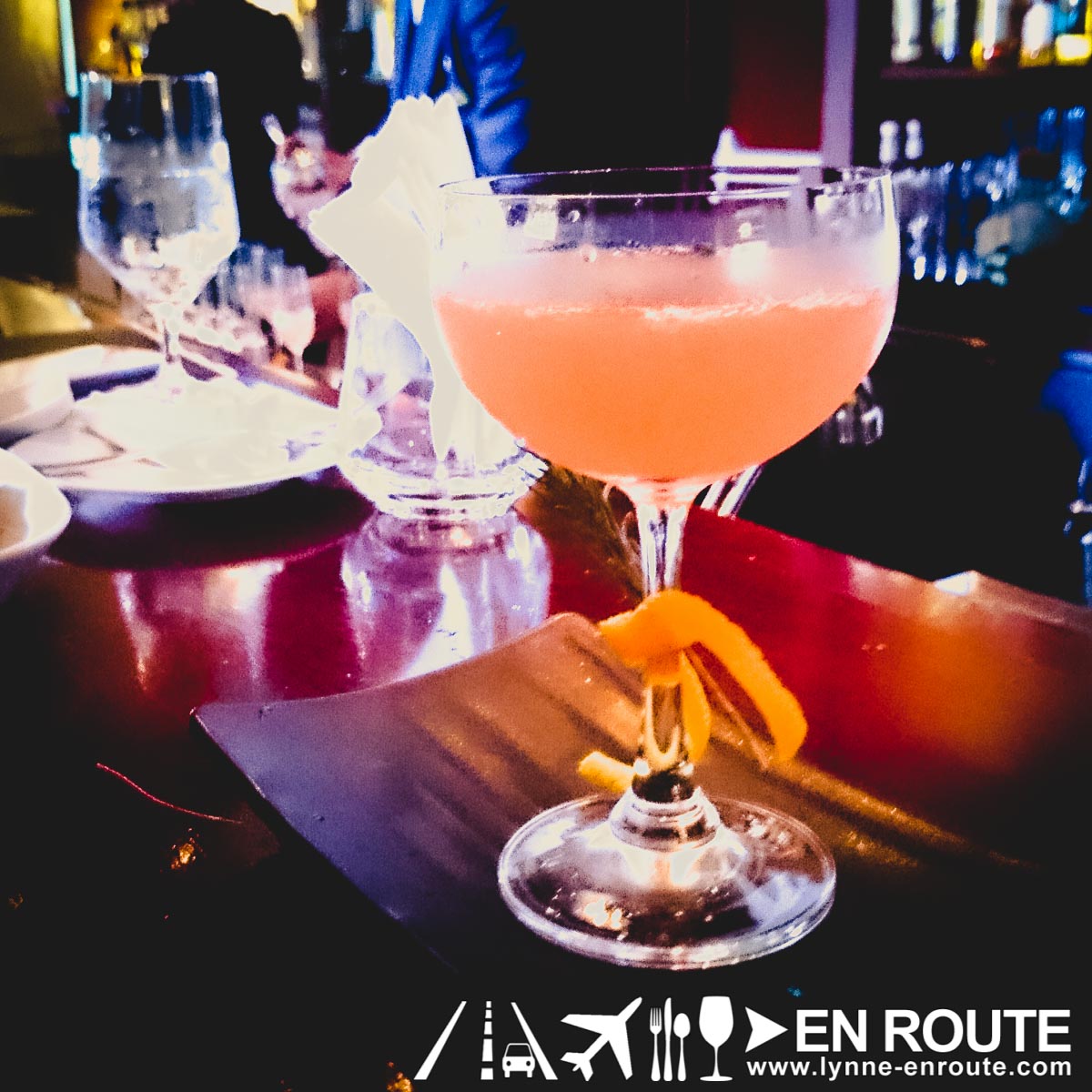 And drawing from his struggles to even become a bartender in the first place, his other creation, The Man, loads up Campari and fresh pomelo with a Ketel One vodka Base, to create a cocktail that tells so much how his career has changed him, and how his entry into this competition was a vindication of his desires. 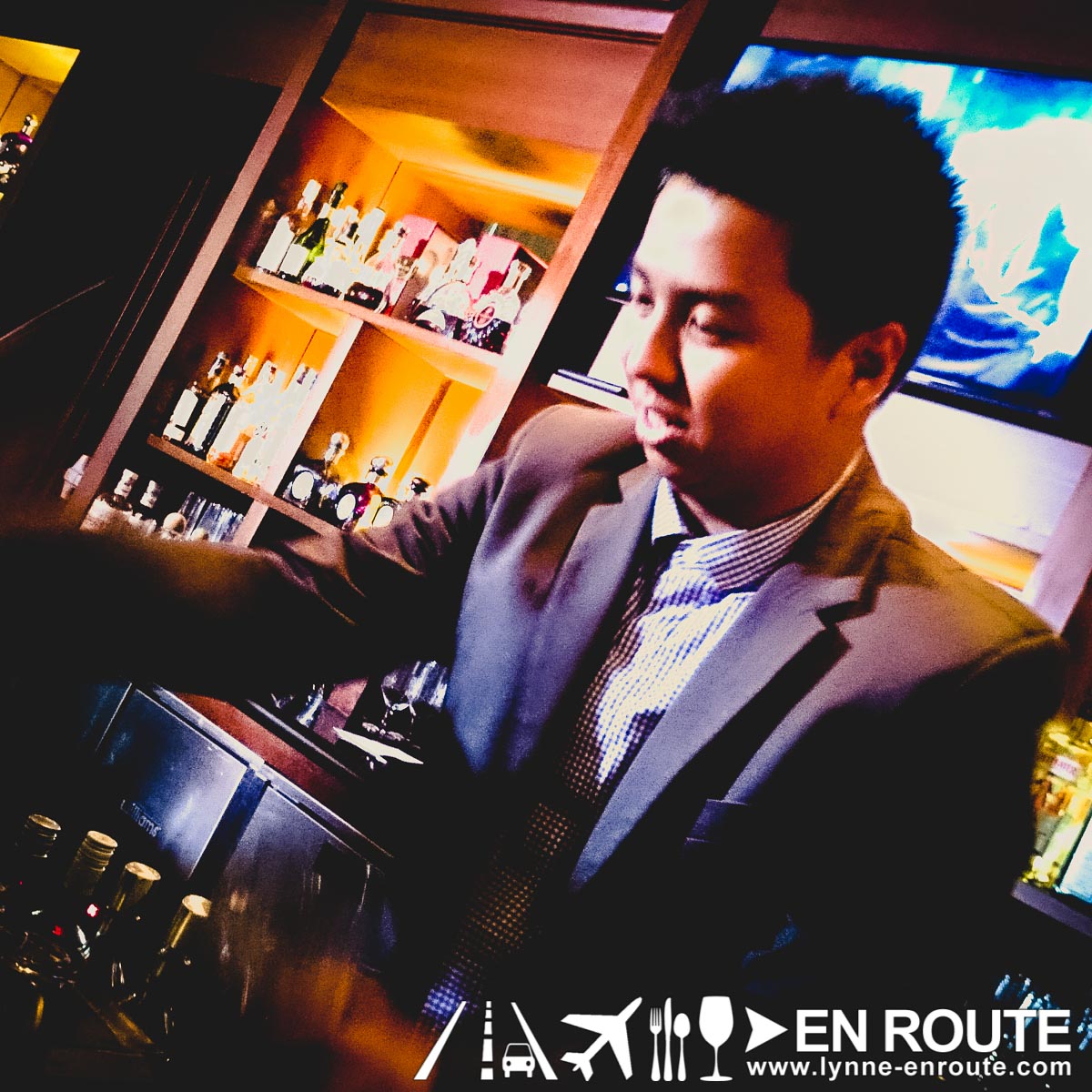 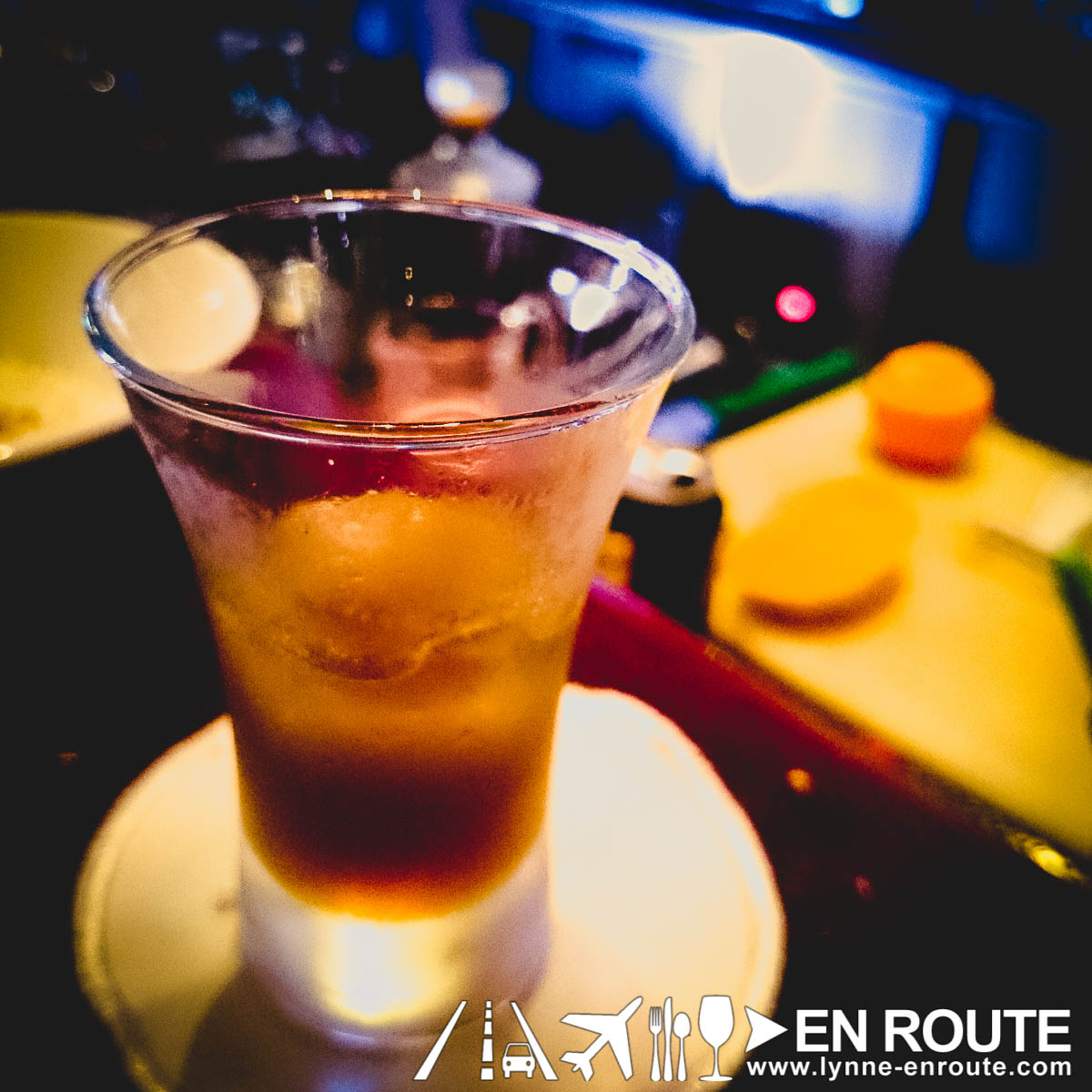 Another one tracing his roots back to The Long Bar and now already the local ambassador for Diageo Reserve, Rian Asiddao indulges the group by going back to the stick to whip up one of the Long Bar of Raffles Manila’s signature cocktails: Panutsa Old Fashioned. With a twirl of the spoon and a pour into the jigger of their carefully guarded sweet brown sugar syrup to mix with bourbon, it was the right way to end this part of the tour. 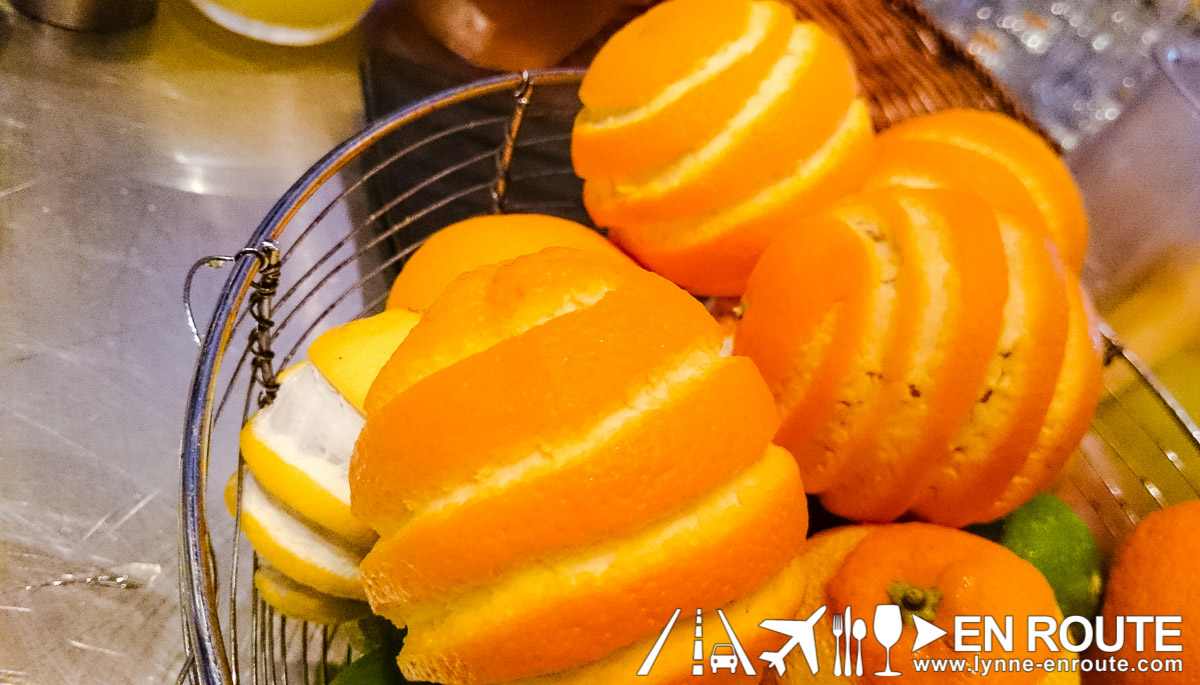 Hopping onto the bus, and it was off to the second bar: 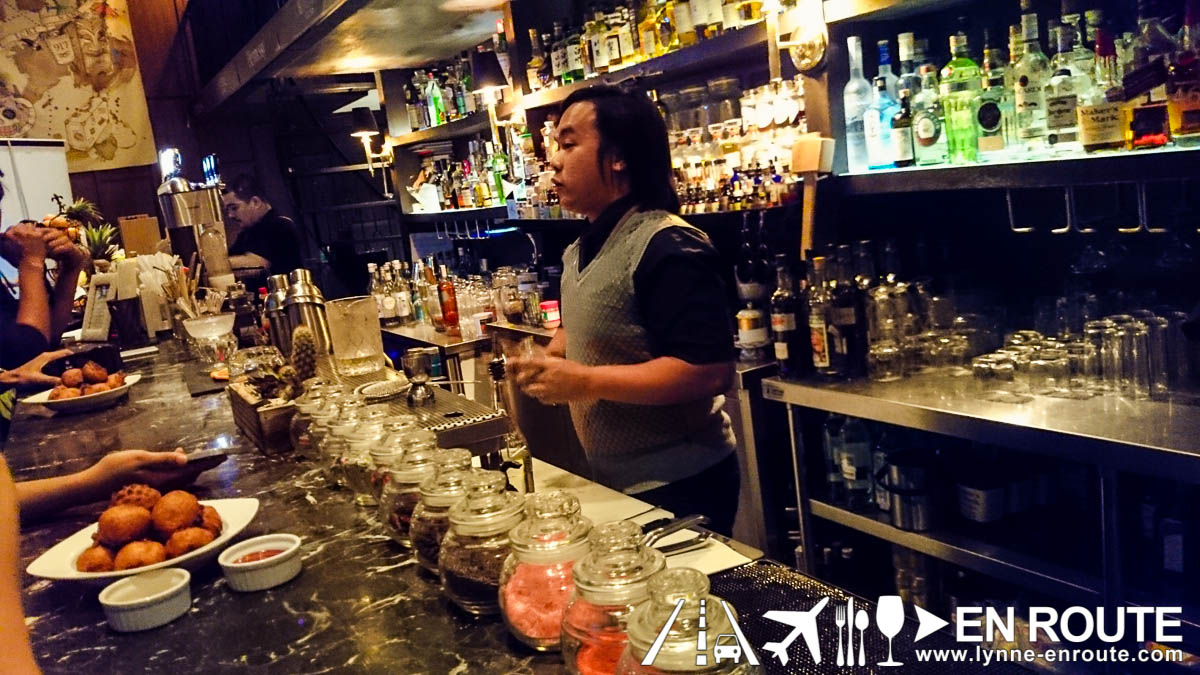 There’s an air of calm coming from Mark that was a stark contrast to the ever growing noise and chaos around Niner Ichi Nana, signaling that the work day was over and it was time for a tipple or three as salarymen wait out the rain brewing into a torrent outside. Carefully, he explains his drinks as he prepares each ingredient one by one:

The Rested 87 was a bold move in trying to balance a Don Julio Reposado Tequila to something that will not overwhelm a non-seasoned drinker. Yet with a smoking of the glass and a splash of vermouth and oleo saccarum to tone down the distinctive sting of tequila, the cocktail became the perfect rainy night companion together with some tasty corn dog bites. 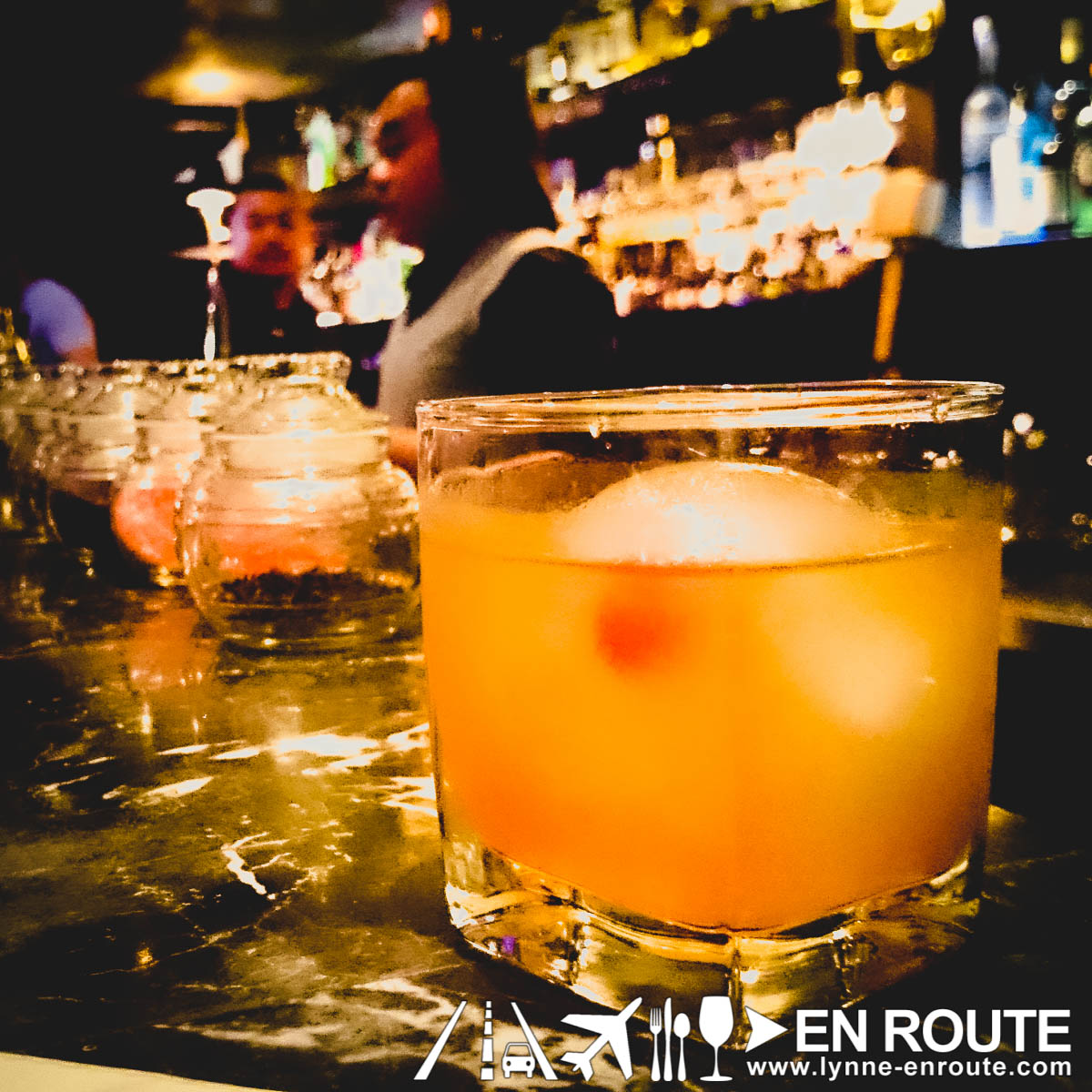 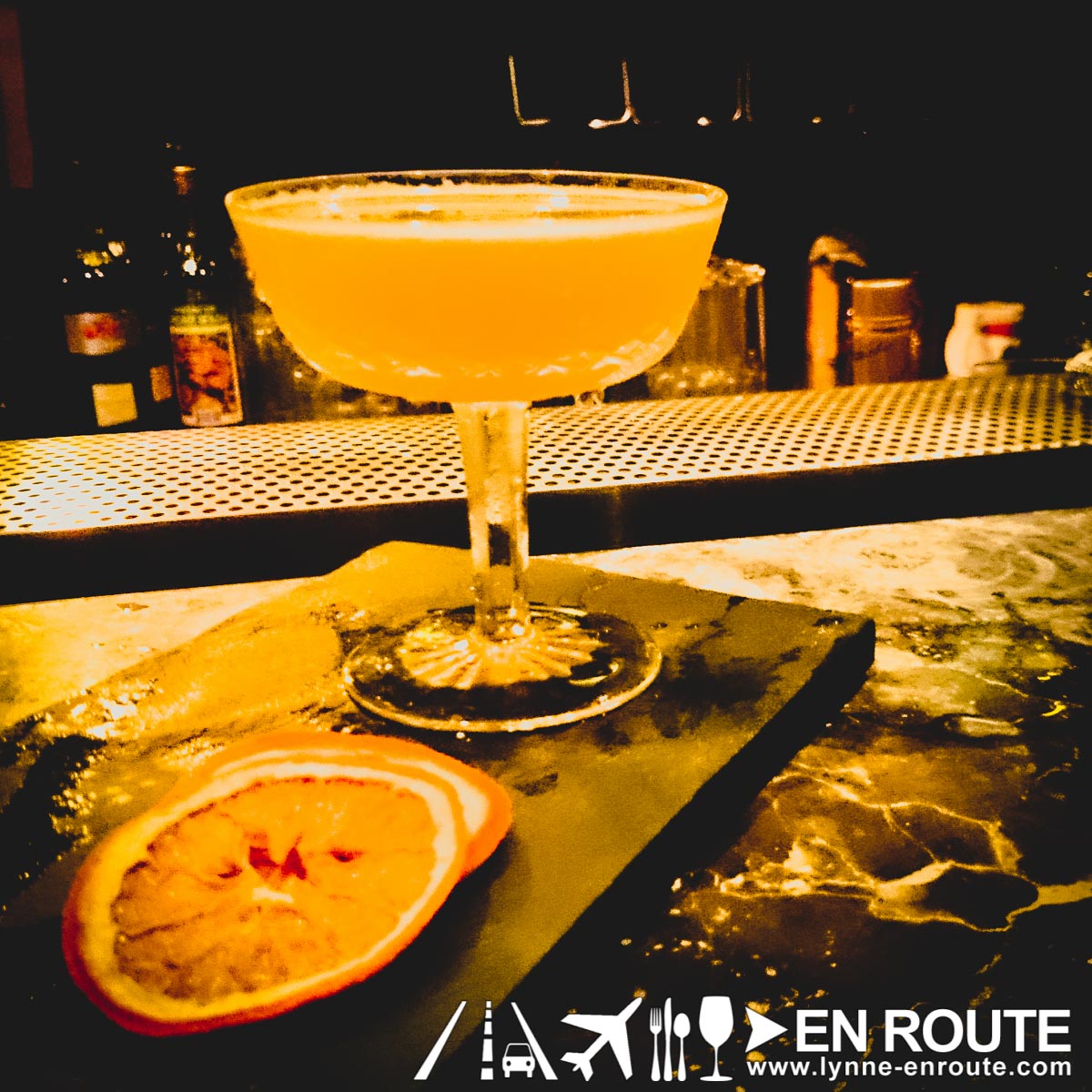 From bold on to citrusy refreshing with hints of Johnnie Walker Platinum refinement, the Bloody Monkey felt like a great follow-up cocktail to reset the palate. Personally, one of the best cocktails of the night.

One can just stay here and let the rain settle down, but there was more to see and do: 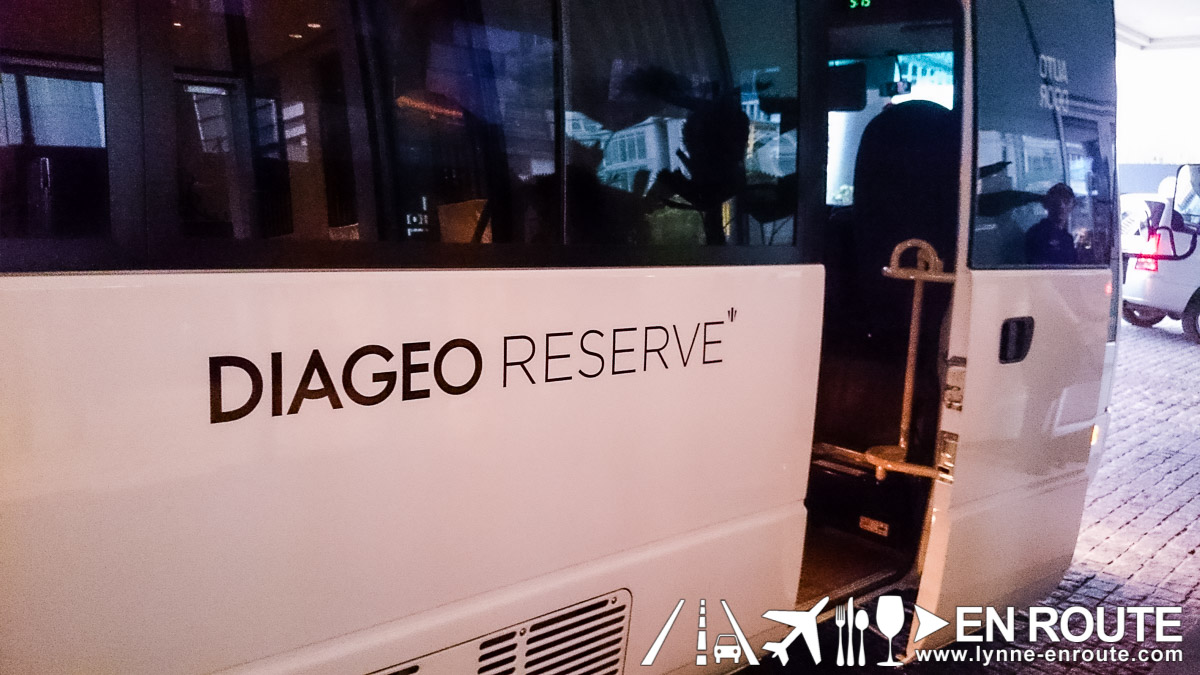