How to Make James Bond’s “Vesper”

In celebration of James Bond’s 50 years of sexy espionage and the release of the latest Bond film “Skyfall”, it was all but proper to pay tribute to one of the most dashing, debonaire, non-Rambo superheroes by making the very drink that James Bond named himself: the Vesper.

The Vesper actually made its first appearance in the Casino Royale movie, but it actually all started in the James Bond novel with the same name.

This was how James Bond described it in the novel:

“‘Three measures of Gordon’s, one of vodka, half a measure of Kina Lillet. Shake it very well until it’s ice-cold, then add a large thin slice of lemon-peel. Got it?” 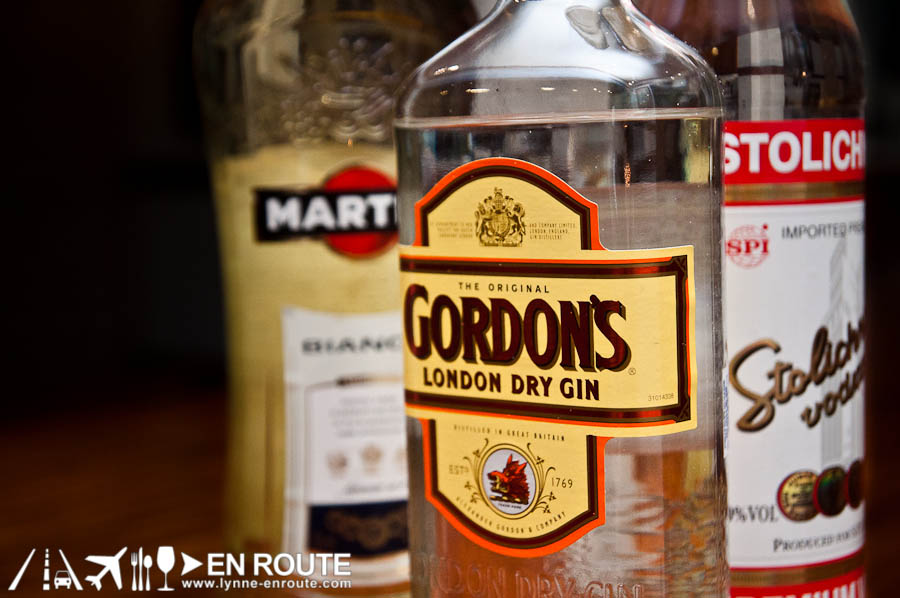 For the normal Filipino cocktail drinker used to a bit of citrusy sweetness, this recipe sounds like the making for an alternative to gasoline. But only one way to find out how it tastes: Time to make one.

One problem: Kina Lillet is a very rare ingredient since they have stopped production. On further research, alternatives were also very rare and might only be available outside of the Philippines, so as a substitute, a Vermouth with a brand Martini Bianco will be used.

For the rest, Gordon’s Gin is easy to find, and historical accounts of the creation of this drink specified Stolichnaya Vodka. (This sure is becoming an expensive drink for an experiment).

Following James Bond (and it is also in the book 501 Must Drink Cocktails!), here is an appropriate ratio: 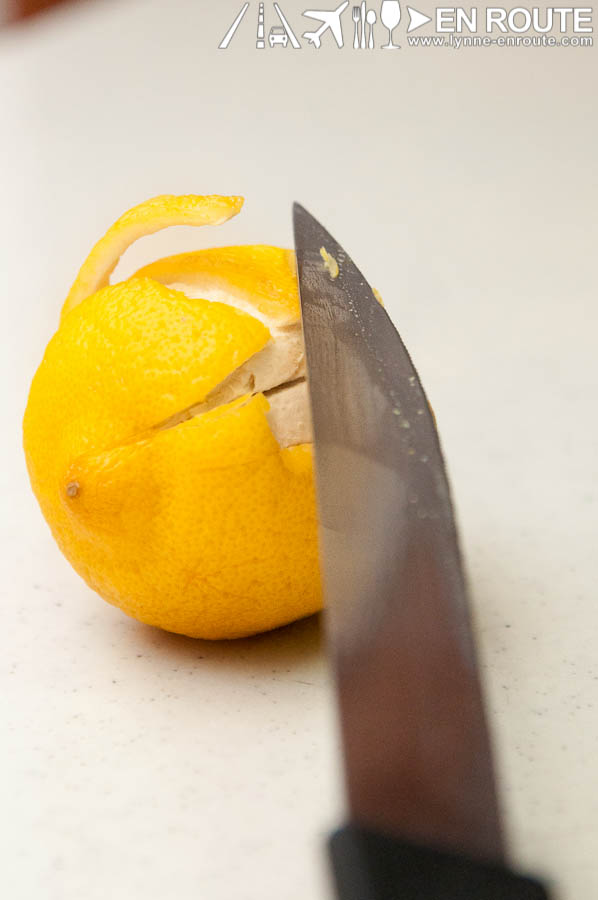 Directions:
Dump all the liquid in a shaker full of ice, shake until the shaker turns frosty outside, pour into the martini glass, then strip off a large peel of lemon.

Some tactics on peeling were to just run a knife along 2 points of the skin, then just peel off with your hand (Sorry, En Route has no fruit peeling skills) twist the peel on top of the liquid for the oils come out, rub it along the rim of the glass, and drop it gently so as not to make a splash.

And there you have The Vesper. 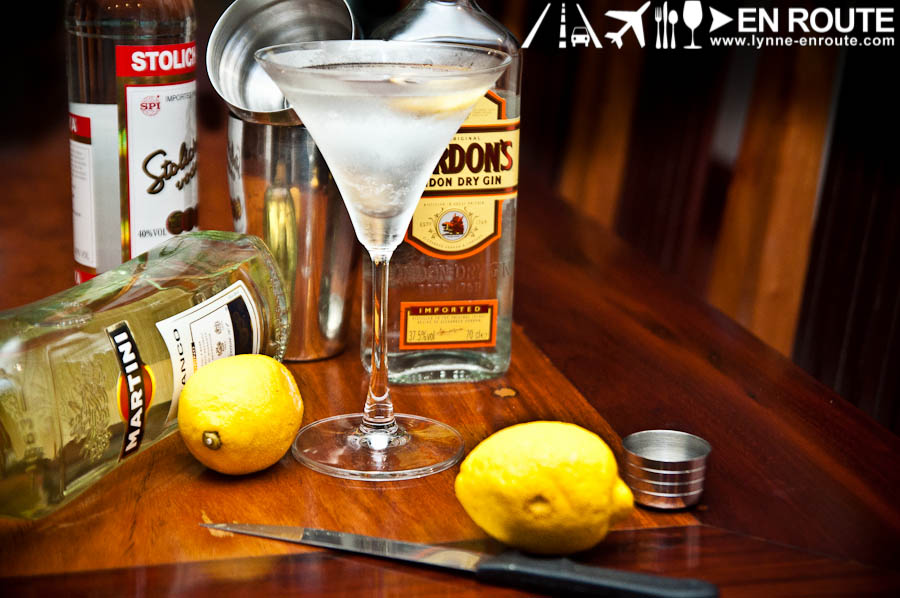 Intitial reaction:
#%!*$#</+ there’s nothing in here but pure alcohol!

One sip and anyone with a weak tolerance might have second thoughts on how James Bond can act so smooth when this thing runs down the throat like liquid sandpaper. But after a while (and from trying other kinds of martinis), this really is how martinis are supposed to be.

And as a martini, this one is relatively refreshing, thanks to the lemon peel. Maybe it’s time to also venture forth past the endless variations of Mojitos, Amaretto Sours, and even past the “Ang Ninong”

Probably drinking it is like an acquired taste that may go well with some slightly spiced peanuts. It is a cocktail that may be nursed the whole night for those who are not used to drinking martinis. For those that may know their gin or vodka, maybe you can replace it with your preferred brand like a Bombay Sapphire for Gin or a Belvedere or Grey Goose for the Vodka. Either way, the thing about cocktail making is you have to make one that you will like. 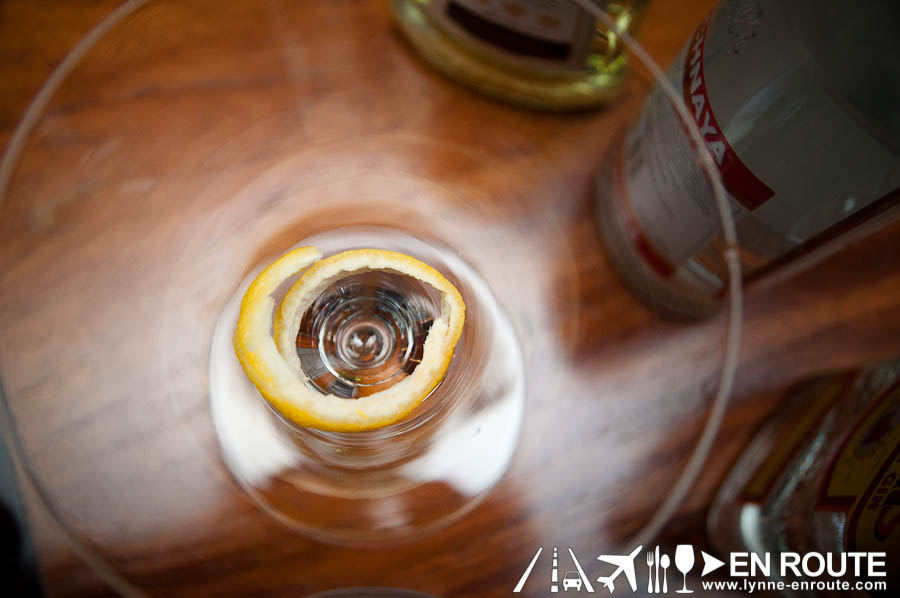 After a few more experiments with these, though, and I can understand why Bond named it after Vesper Lynd, the girl who has scarred Bond and made him the cold blooded, romantically disposable assassin that he is. In a quote from the 2006 movie Casino Royale:

James Bond: I think I’ll call it a Vesper.
Vesper Lynd: Because of the bitter aftertaste?
James Bond: No, because once you’ve tasted it, that’s all you want to drink. 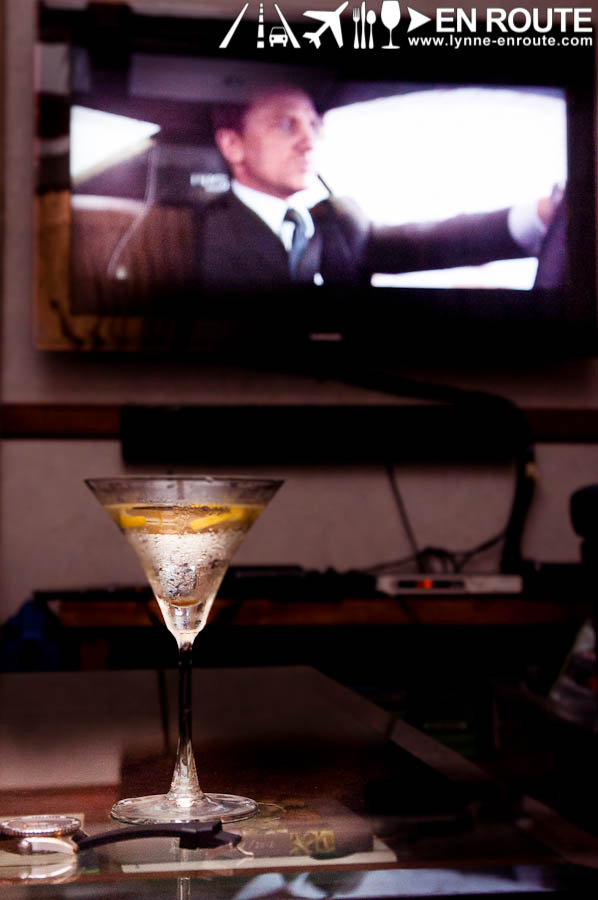 Enjoy this while watching your favorite 007 movie or just in a bar, channeling your inner Bond. Admit it ,especially for the guys: Guys fancy themselves as a James Bond once in a while.

Have you tried the Vesper? Think Bond was an idiot in making this drink that may be as fictional in appeal as he is? Write your comments below.