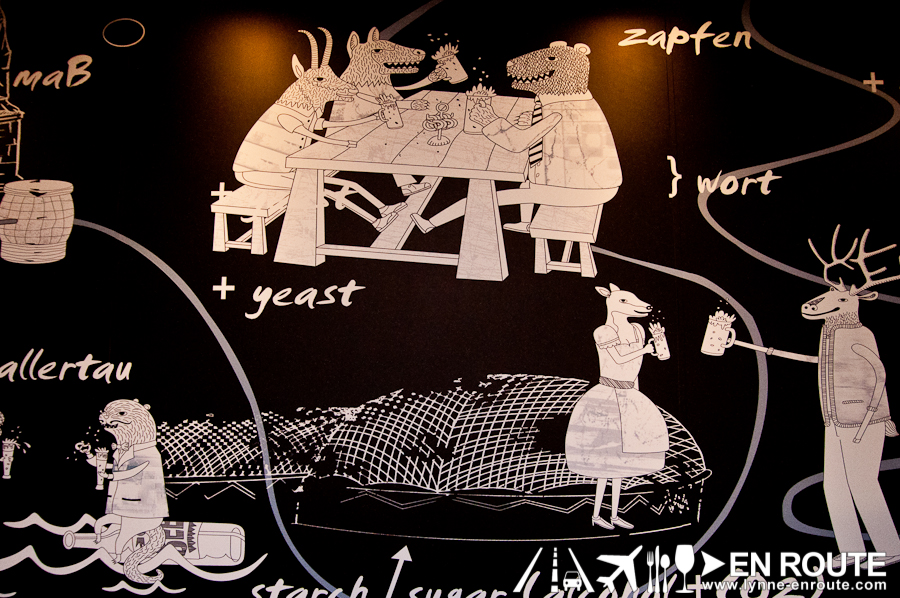 When you do a quick Google search on “German Restaurants in Manila”, no definite name seems to come out. There was one just half a decade ago called Mickey’s Delicatessen in Jupiter Street in Makati, with the sausage making now continued at the quaint Poco Deli in Kapitolyo and Ayala Triange Gardens. And for those in the know, the hidden Treffpunkt in EDSA got some more hams, sausages, and discounted German beers for those willing to find this little gem. 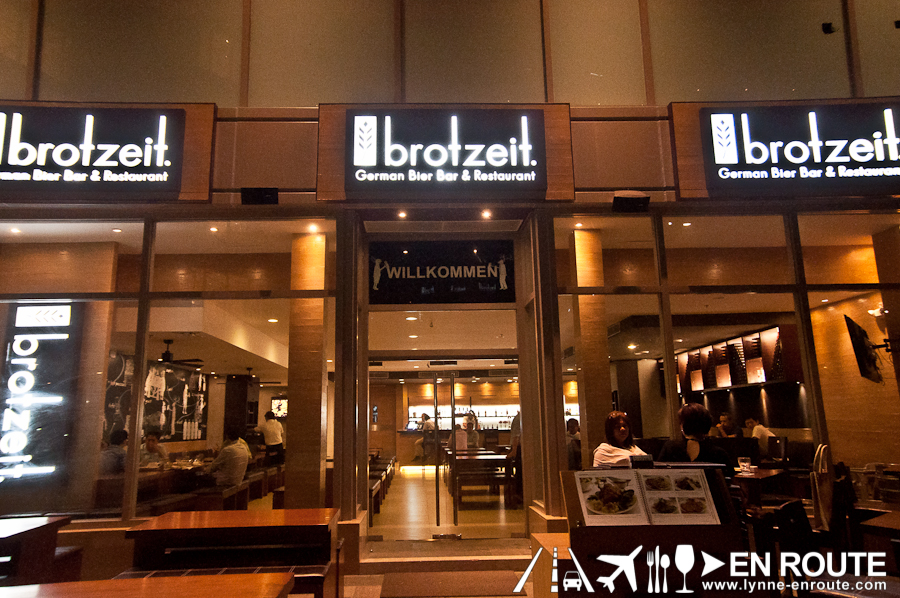 Now it’s time to add a new one into that list. Brotzeit from Singapore has now landed in Manila, probably feeling that a good chunk of the food goers are looking at more variety. This one is a coverage of their grand opening where En Route was fortunate to be invited (most probably because someone took notice of all the proliferate and unapologetic posts about beer, wine and all things booze) 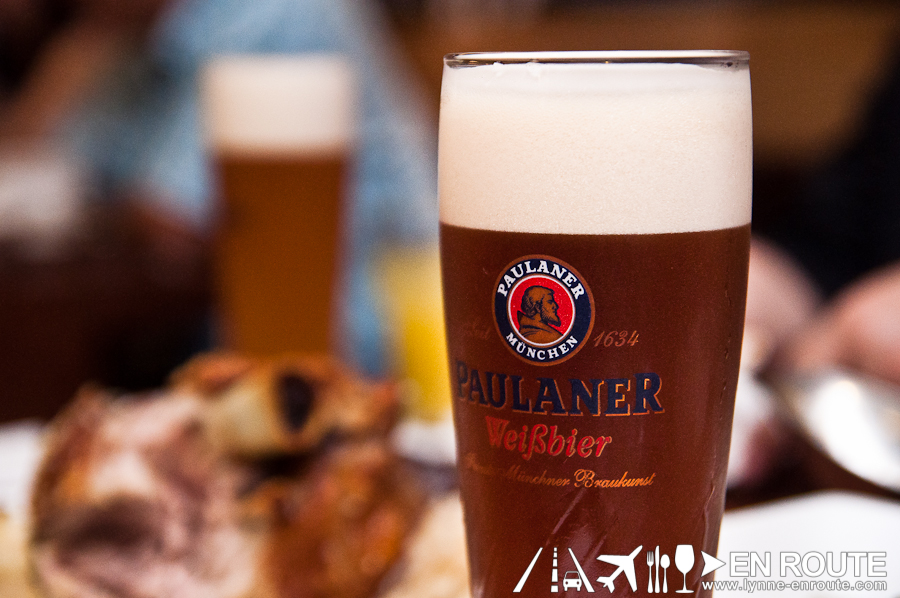 Brotzeit translates to “Bread time”, and this joint is here to provide that and more. More comes in the form of sausages, pork knuckles, and loads and loads of fresh draft beer.

Brotzeit carries the Paulaner brand of beer from Germany. And if there’s one thing great about German beer, it’s that one just cannot make beer unless it follows the German Purity Law which ensures that a certain type of brew should only be made with a particular set of ingredients.

Now here’s a country where its priorities are in order. A great country will always be the one that makes great beer. Can’t wait to visit them on the next European adventure!

The kinds of beer they carry here can satisfy everyone, from the lovers of fruity flavored deceptive tipples to the hardcore purists of hoppy, wheaty and malty flavors. Here’s a small sample of what is in the beer bar. 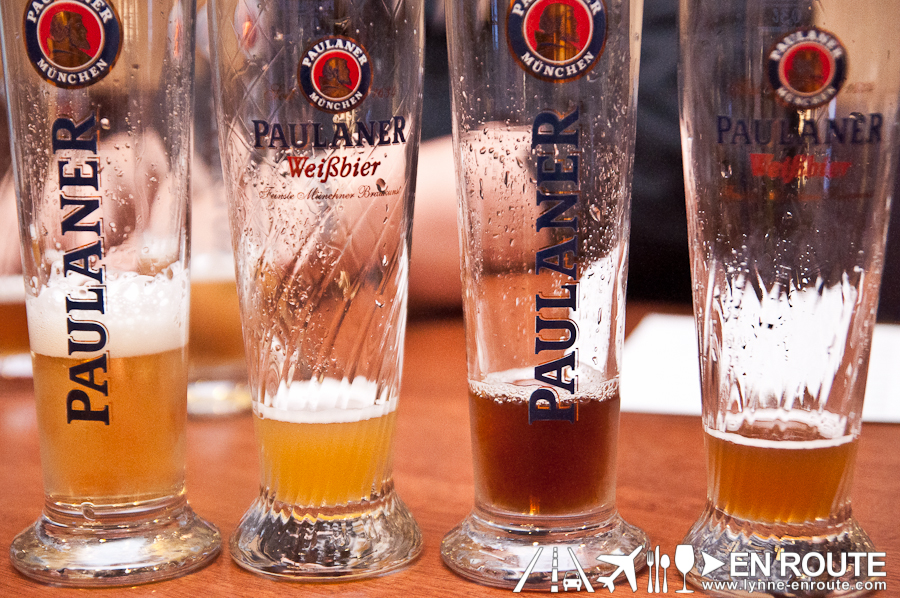 From left to right (description coming from their menu):

Hefe – Weissbier – The No. 1 Weissbier in Germany. They typical beer from Munch: top fermented, unfiltered, made with wheat malt. Naturally cloudy with vitamins and hints of banana. 5.5% Alc.

Dunkel Hefe – Weissbier – Paulaner, a full bodied beer from Munich. Chestnut-brown, naturally cloudy, top fermented and unfiltered, made with roasted what malt. 5.3% Alc. (Side note: This one totally rocks!)

Since beer drinking in Brotzeit has been changed to an appreciation of craftsmanship than that of a process of mind numbing intoxication, it would be best to go here with friends and share on little samples. Here’s hoping they make sample beer flights so that people can get to taste each in little volumes.

To match your beer binge, Brotzeit has a few German goodies that should satisfy the munchies once the alcohol begins to kick in: 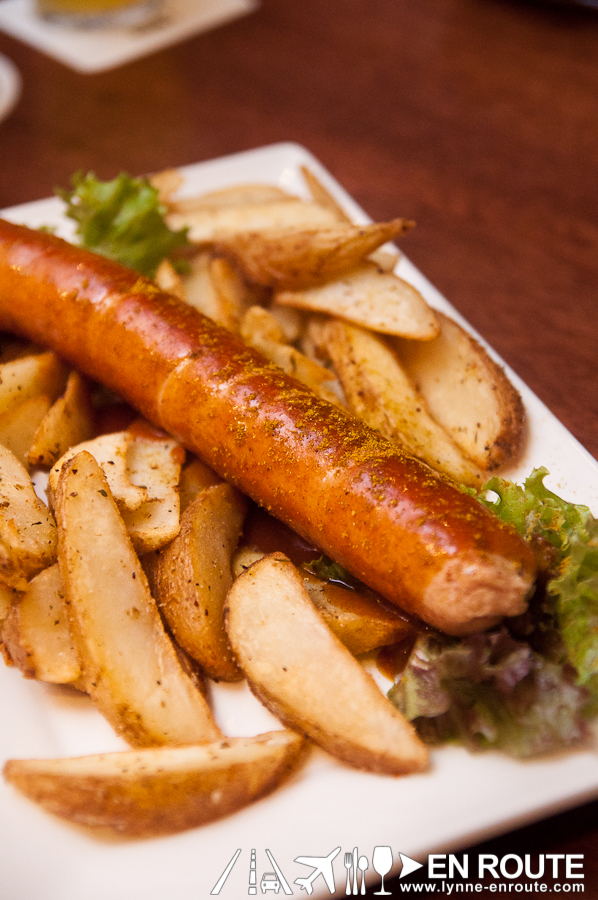 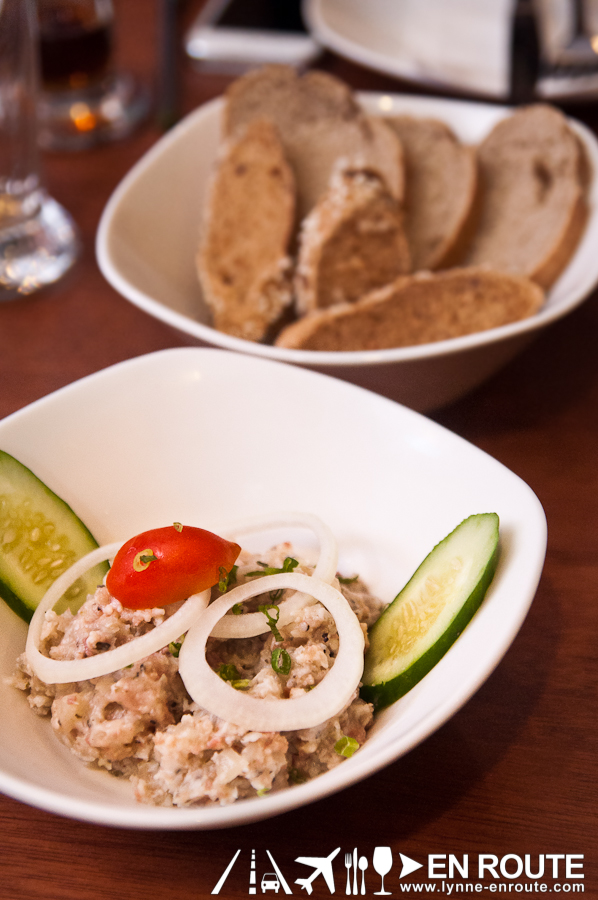 German cuisine seems to be known for sausages, so never let your night pass by without getting a sample. There will be many to choose from, but the Currywurst (PHP 480.00) curry spiced sausage has a good spicy kick to jolt you up in case you get too intoxicated. And it’s got fries for that carbo munchies, too!

There’s also this Bacon Spread. While it sounds good, the taste did come out with the onion overpowering any bacon flavor. More bacon is in order (which of course, is never a bad thing).

There’s this dish that looks like Mac N’ Cheese that’s called Kasespatzle (PHP 580.00) . It’s basically three kinds of cheeses in pasta with onion rings. The taste will be quite familiar, even though it can get a bit pricey.

More of salad? There’s a few like the Chicken Salad (PHP 280.00) this one is quite filling if eaten alone. Oh, and they got some fish like salmon, too. Quite frankly, though, once you get those sausages and some beer, you will be hard pressed to find this appealing. 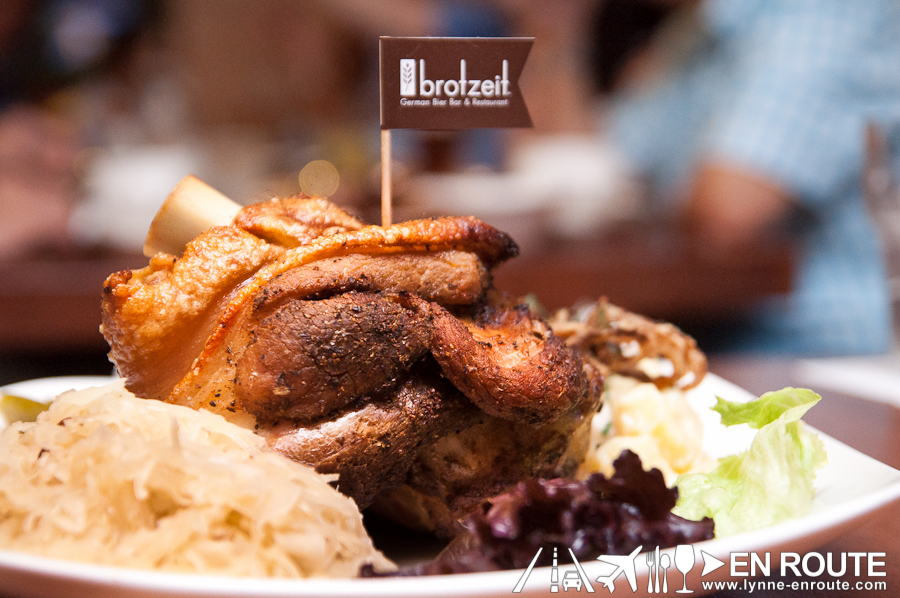 No German beerfest will be complete without a big chunk of a pig part. This is fulfilled with Brotzeit’s Pork Knuckle (PHP 1,280.00). The chef from Brotzeit mentioned that they have a special means of cooking this using its own juices while still retaining the tenderness and flavor. It’s practically the Filipino Crispy Pata, and it is hard to go wrong with deep fried pork stuff when chugging down a cold one.

If in the event you still want to keep on munching, you can finish it off with some Apple Strudel (PHP 280.00) or those bits of bread to dip in jam called “Emperor’s Cake” (PHP 350.00). The strudel came out a bit dry, but the Emperor’s Cake was soft, moist, and very tasty with the jam. 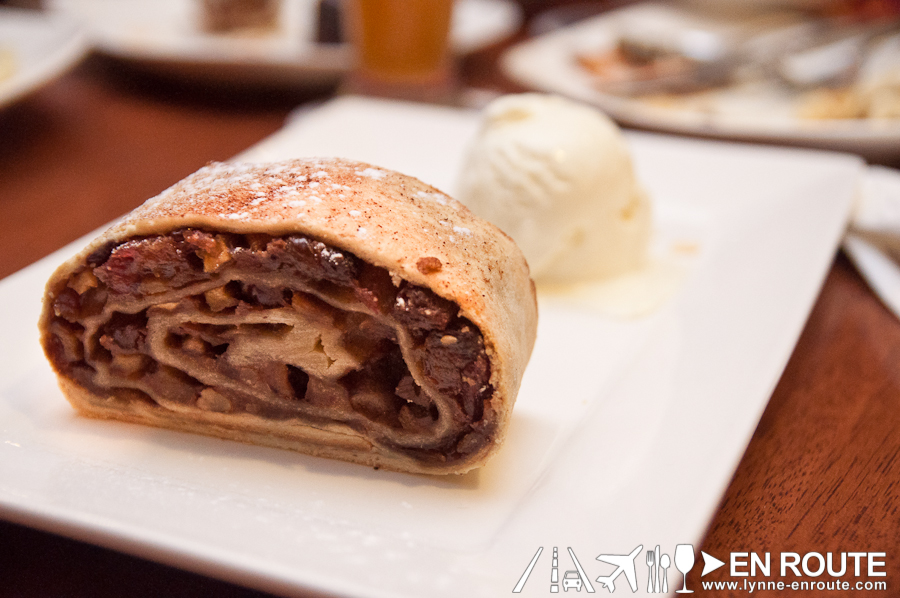 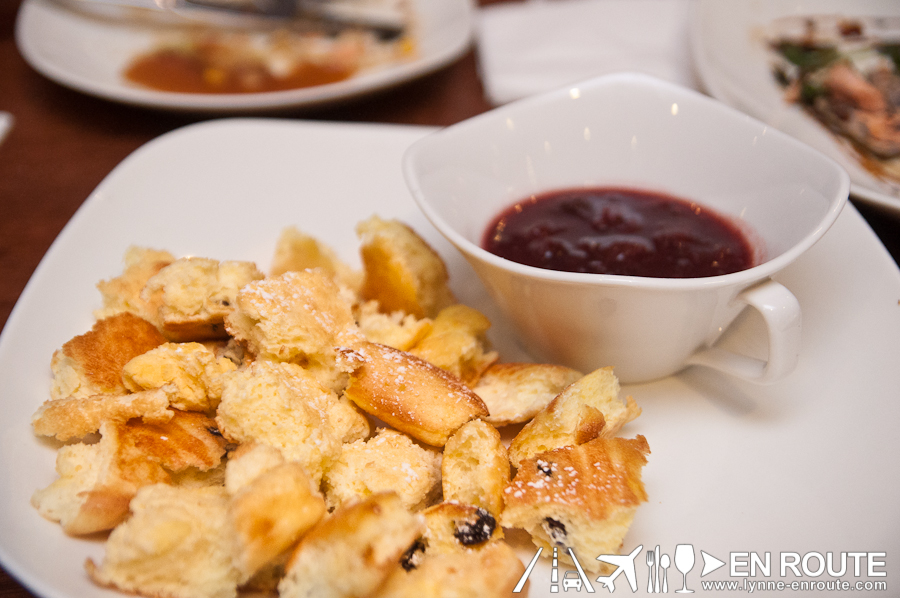 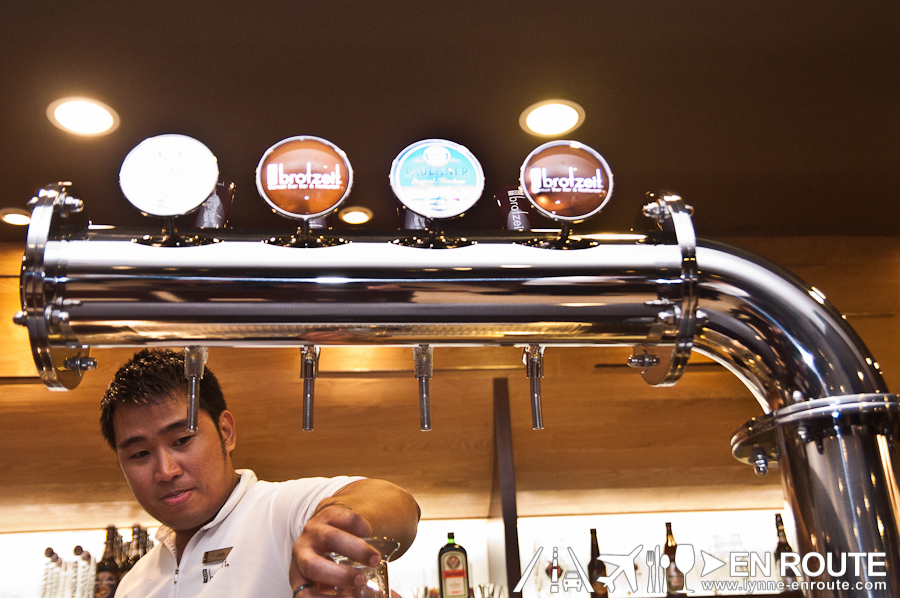 Still on adjustment mode, but Brotzeit promises to bring a German dimension into the Manila Foodie limelight. Best things in the menu? Beer, Sausages, Beer, Pork Knuckles…. and more beer. 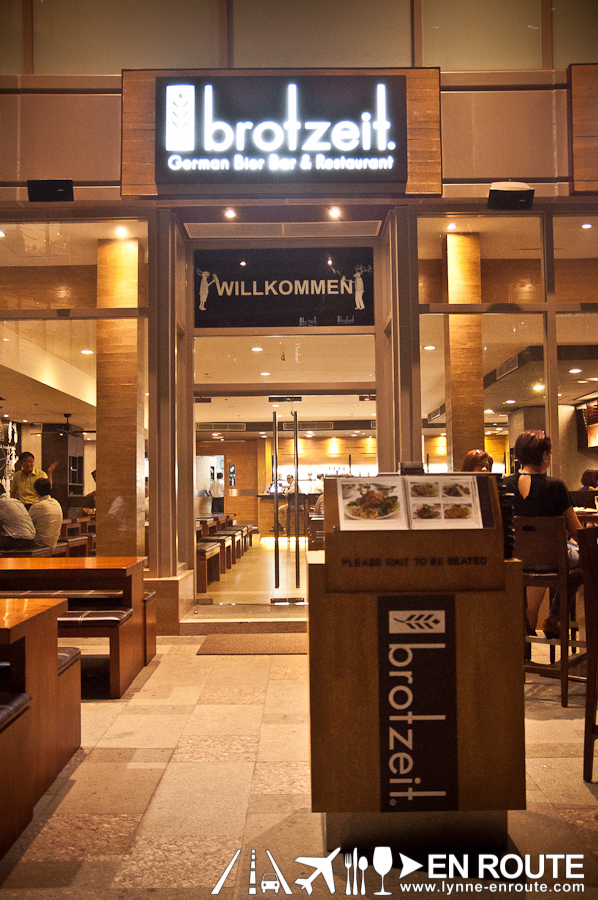 Brotzeit is located at the street level of the Shangri-La Plaza Mall in Mandaluyong City, Philippines Tel. Nos. +632 631-1489, +632-668-4635
You can visit their webpage at http://www.brotzeit.co/ or the Brotzeit Philippines Facebook Page

Disclosure: This was an event sponsored by Brotzeit Philippines

Detour: The word “beer” has been said in this article at least 20 times. Just saying 😛